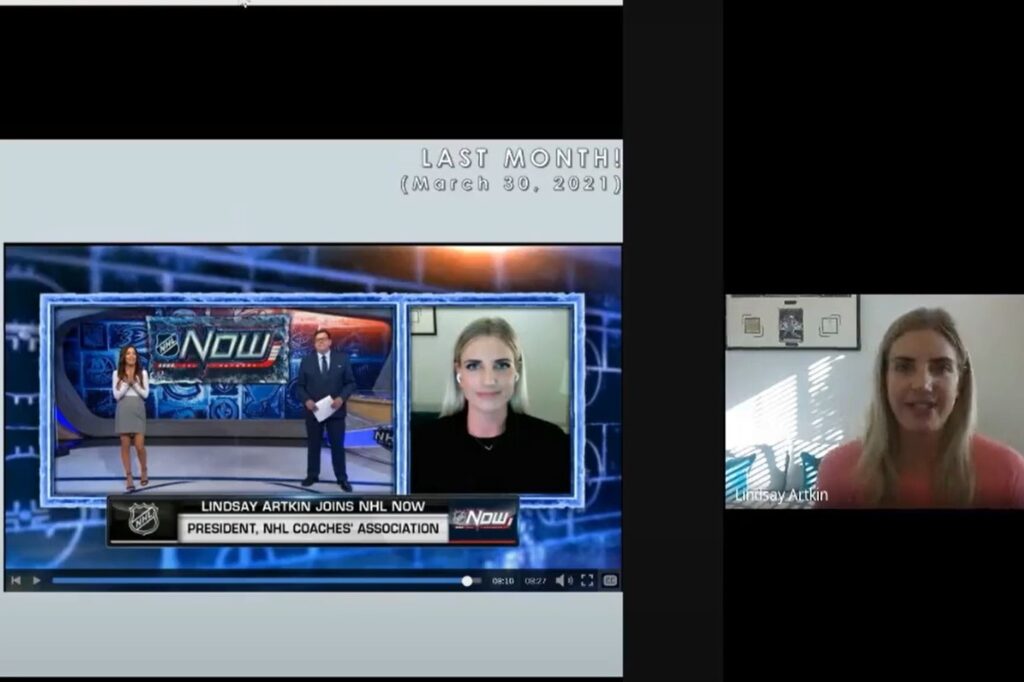 SCS Health and Physical Education teacher Ms Peggy Donohue recently shot for a guest speaker for her Recreation and Healthy Active Living Leadership class; she scored with an Alumna.

Lindsay (Pennal) Artkin ’02 joined the class virtually from California recently to tell them about her position as president of the National Hockey League Coaches’ Association, to share her career path, to suggest ways in which women can work in professional sports, the importance of mentorship and networking, and to offer some life advice.

Lindsay graduated from St. Clement’s in 2002 and from there attended McGill for her Bachelor of Commerce.

“I’d always been a math nerd,” she laughed. “I was part of the Math Club at SCS, I took all the math courses including AP Math. I did a finance major at McGill, and then took a couple of marketing courses and really loved them. I loved the storytelling aspect.”

From McGill, she went into finance believing that it best combined her love of math and analytics with marketing. She worked in finance for ten years before relocating to California to work in the technology industry while also setting up her own consulting business.

“Former colleagues had reached out to me looking for help launching a new website, trying to raise money for a new business strategy, or trying to find new investors,” she explained.

One of those former colleagues was Mike Hirshfeld who had just been hired as the executive director of the NHL Coaches’ Association and tasked with restructuring the organization.

“He needed help rebuilding,” Lindsay said. “Through all my experiences I had been wearing many hats and I knew how to do a lot of different things, whether it was HR, marketing, accounting, finance, or public relations…so I was a good candidate to come into the NHL Coaches’ Association and essentially help them build up from the ground floor.”

The NHL Coaches’ Association represents more than 200 coaches and supports them with their salary, contract, pension, and health benefits, to name a few.

“We support all of the coaches in everything that we call ‘non-hockey,’” she said. “We’ll never get involved in whether Marner should play with Matthews, but rather with everything behind-the-scenes that goes into running a business.”

Beyond those day-to-day tasks, the association is committed to helping develop the next generation of NHL coaches.

“All of the programmes and initiatives we do are focused on that,” Lindsay said. “What we’ve really stepped up with in the last couple of years is figuring out how that next generation of coaches can be much more diverse because right now 100% of NHL coaches are men and they are predominately white men. Obviously, that needs to change.”

Lindsay shared with the class some lessons that she has learned so far, and particularly in her professional career.

Firstly, she advised them to Ask Lots of Questions.

“There’s no such thing as a dumb question. Just don’t ask it twice,” she advised. “When I first got involved in the NHL Coaches’ Association, I didn’t know much about hockey. I grew up in Toronto so I was a Leaf fan just by the nature of my hometown, but I never played hockey. I certainly never coached hockey.”

By asking lots of questions, she was able to find her way in her new world.

The second lesson she learned from her mentors and her female role models was to Work Hard.

“I always worked for women who ‘grinded’, as we say in hockey,” she said. “They were committed to their role and they supported me and we worked hard together.”

The third lesson Lindsay offered was to Become Indispensable. “When I first started at a former company in 2008,” she recalled, “it was right at the start of the major financial crisis.”

After just a month or two in the new position, the company laid off 50% of their employees. “Even though I had only been there for a couple of months, I was kept on,” she said. “I was in my early 20s and really didn’t know what I was doing, but I had already proven that I could do a lot of different things.”

While in that position, Lindsay learned the importance of her fourth lesson: Attention to Detail.

Lindsay told the class to quadruple check everything. “Own it and be extremely confident about everything you do. Whether sharing with a colleague, passing work on to your boss, or presenting in a meeting, make sure you have 100% confidence that everything is right because you spent the time going through all the details.”

Lindsay’s fifth lesson was to Surround Yourself With Good People.

Lindsay had worked together with Mike Hirshfeld for eight years at two different companies in the investment business before he approached her to work at the NHLCA.

“When Mike became the executive director of the NHL Coaches’ Association he reached out to me because we had always enjoyed working together.”

Finally, Lindsay advised the class that they should each Promote Yourself.

“Women aren’t inherently great at promoting ourselves,” she said. “We sort of assume that all of our hard work will get noticed because it’s good, because we’re doing the right stuff. That’s one that I’m still working at.”

Lindsay also advised the class to do things that scare them, to push beyond their boundaries and extend beyond their comfort zones.

“If it doesn’t challenge you,” she explained, “It won’t change you.”