Search
HomeNews & MediaSambea Cochrane is bound to sing about it
POSTED:Apr 14, 2016 CATEGORY:Red Blazer, Inside Our Walls 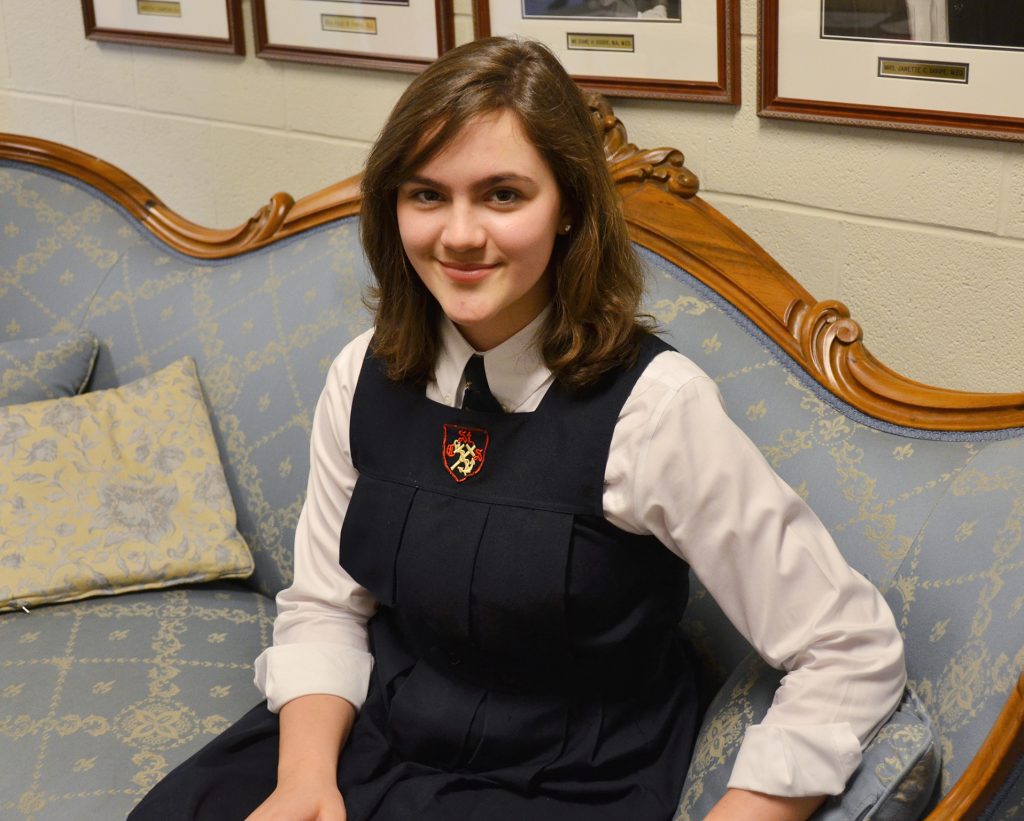 Sambea Cochrane ’19 has come a long way from the earliest performance she remembers, when cheers from an audience following her rendition of “The Hills Are Alive” from The Sound of Music shocked her five-year-old self to tears. These days, the Grade 9 singer-songwriter is much more comfortable behind a microphone, as evidenced by the recent performance of her original song “Loveward Bound” in morning assembly. Sambea chats about her musical development, the song she can’t stop listening to, and why everyone should vote in CBC Music’s Searchlight contest (hint: “Loveward Bound” is entered!)

What spurs your creativity?
It really depends. I write songs about people, concepts, situations, things that have happened, things I wish would happen. Most importantly though, every song I’ve ever written has been driven by emotions. I think there is a lot of strength in the desire to somehow display emotions. As a result, the toughest times can result in the catchiest songs, and even more time in the studio. The song-writing process is pretty much a therapeutic chain of events!

Has anyone played a really significant role in your musical development?
There have been so many influences on me. One of the biggest is my producer Dave MacKenzie at Beyond the Beat Studio. Without him, I never would have recorded anything or performed anywhere; I most likely would have stopped song-writing altogether. He is the kindest and most hard-working person I’ve ever had the good fortune of knowing. Twice a week for the last four years, he has listened to every song, poem, or story that’s crossed my mind, taught me so much from playing guitar to operating producing software, and introduced me to many talented artists who inspire my writing.

Speaking of inspiration, why did you write “Loveward Bound”?
I sang with the Toronto Children’s Chorus up until last year, and over the summer we embarked on a three-week tour to Russia, Poland, Estonia, Latvia, and Lithuania. I met incredible people, and strengthened bonds with the friends I had before the tour. On the final night, we went out for a farewell Polish dinner. It was super emotional, since I knew it was the last time I’d see any of those people again. Back in my hotel room after dinner, I began scribbling down the chorus of “Loveward Bound”, about all the friends I made and what we experienced over those three weeks. Of course, at the time, I had no idea it would end up on an album!

What made you decide to submit your song to the CBC Searchlight contest?
It’s a great avenue for new independent artists. There are so many good songs that never get heard, and CBC Searchlight is another way to try and get your music out there. Vote by April 20!

What’s a typical week at SCS like for you?
SCS is my happy place! Since I live far across the city, I head to school early in the morning. I look forward to my favourite subject (math) as well as English class and singing in the Chamber Choir. I like to do one sport per term; I’m on the track and field team, and last term I ran cross country. Both are good for developing lung capacity for singing! Of course, one of the things I love most about SCS is seeing my crazy gaggle of friends every day who make my life at SCS rather interesting!

What’s the go-to song on your playlist right now?
There are many, but as of this very moment, probably “Golden” by Fall Out Boy. It is a beautifully crafted song with intricately metaphorical lyrics that question the traditional “golden rule” of treating others how you want to be treated. It discusses in considerable depth how sometimes when you treat others well, they don’t return the favour. And worse, how some people are self-deprecating and believe they don’t deserve that favour returned. It’s a really neat song to analyse, because it is particularly enigmatic.

What’s next for you?
I’ve been wondering that very thing! I plan on doing music for the rest of my life (whether I make a career of it or never set foot on a stage again.) My dream of course is to go into music and remain there successfully, but many people share that dream, and it is an extremely tough industry. If music doesn’t end up working out for me, I’d love equally to go into a field related to math and science, like medicine or engineering.

Why should people vote for “Loveward Bound”?
I have worked very hard on it, and I’m so stoked that it is finally out for everyone to hear! I don’t say this often, but I will unapologetically say it now: I am very proud of this song. I’ve put in so much energy over the last few years, and now it feels like it’s starting to come together. That said, I need all the support I can get! Anything from checking out the video on my website or Facebook page, to simply telling me you liked my song, is so much appreciated and does not go unnoticed.

I’m also releasing my full album, Radio Road, and I’m excited to be partnering with SCS’s Syrian Refugee Committee, donating $2 from each album pre-order. This album is something I love and that I’ve worked very hard on, and I feel honoured that I can use it to help others in need.

Amongst the many things for which St. Clement’s School is renowned are the strength of its community and the 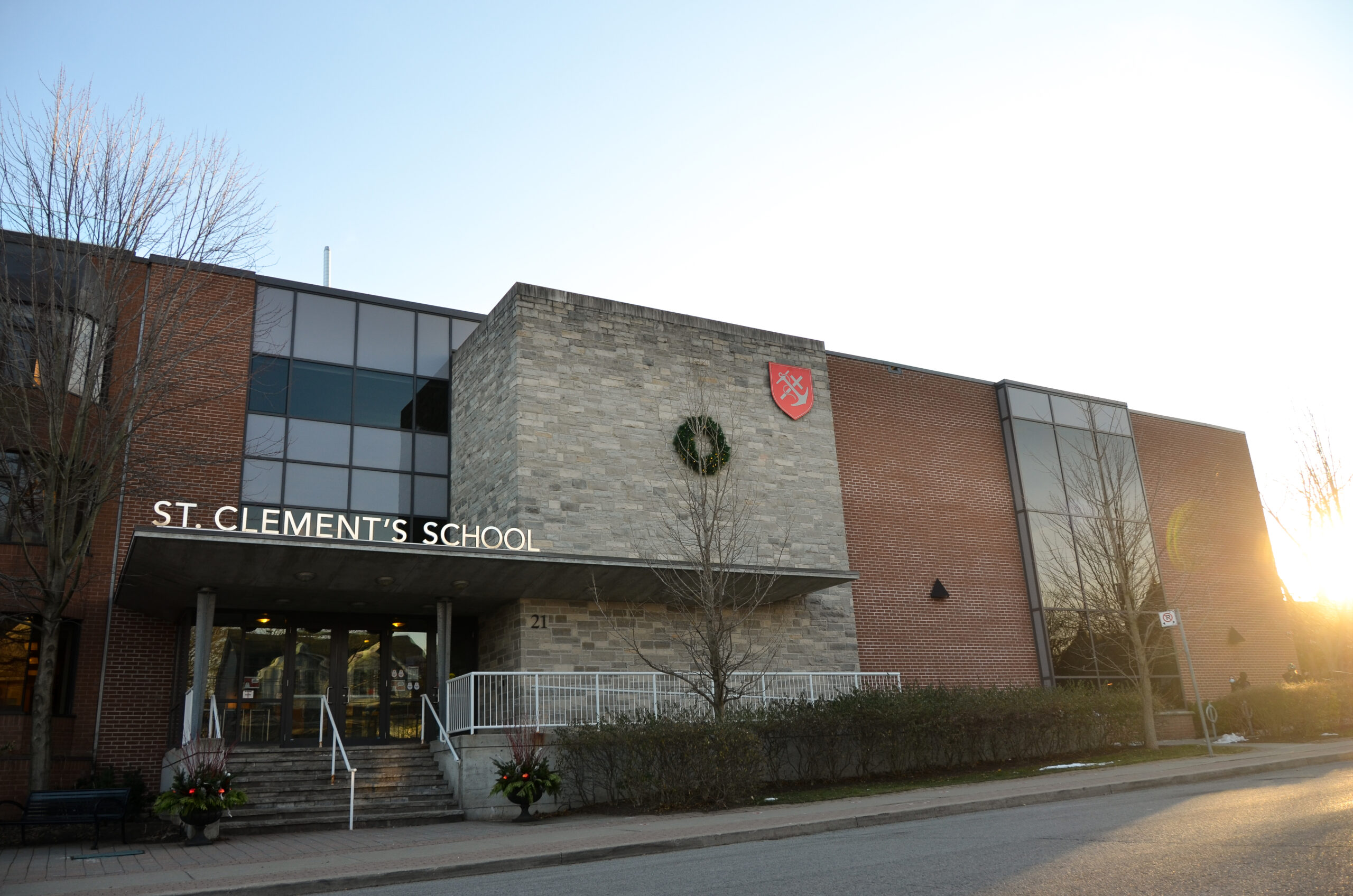 St. Clement’s School’s roots in the local community are long and rich. From our origins in the parish hall of