HomeNews & Media#SCSSpotlight – Penguins, Hatchlings and Robots: SCS in the world of Robotics Competitions.
POSTED:Jun 19, 2018 CATEGORY:Red Blazer, Inside Our Walls 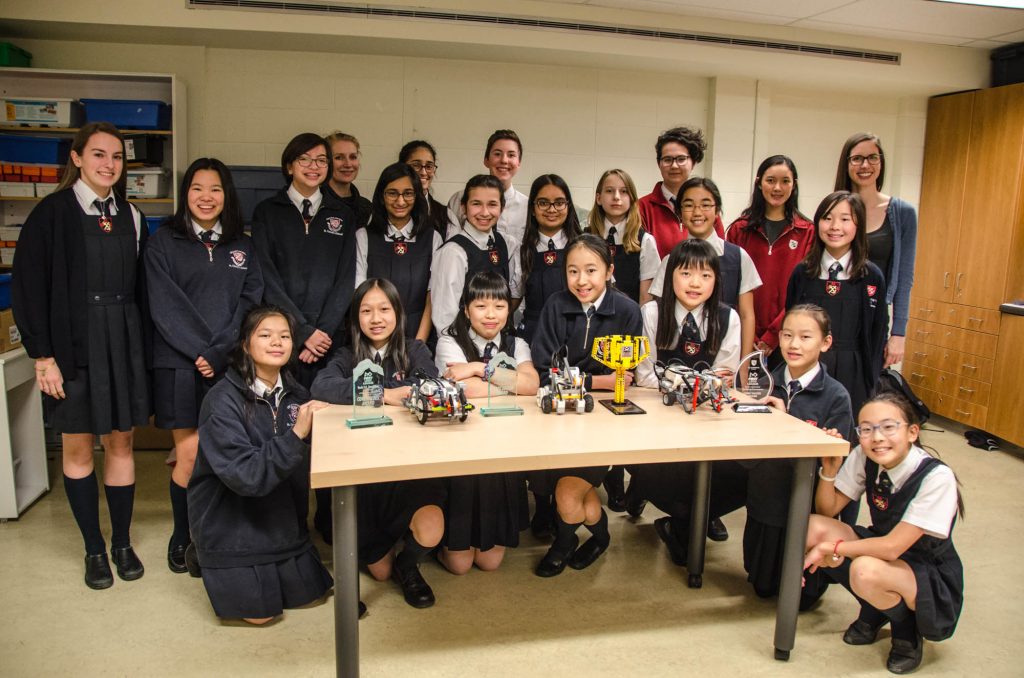 From self-driving cars to entirely automated industries, robots are undeniably the way of the future.

For today’s students, robotics courses and robotics competitions are widely seen as some of the best interdisciplinary ways of promoting STEM skills and improving team building. And, as the field is one of the fastest-developing technology areas, it can also be a stepping stone to a promising career.

At St. Clement’s School, robotics is not just seen as something for tomorrow, but as a very valuable tool for today.

The building blocks of robotics

Amy Chapman is SCS’s staff supervisor for LEGO Robotics. The famous Danish building-block company expanded into robotics in the 1990s and their Mindstorms platform and easy-connect components have proven to be amongst the most popular robotics systems especially for beginners and younger designers.

SCS has three teams that compete in LEGO Robotics competitions: The Hatchlings who are in their rookie year, the SCS Penguins, and the Penguin Squad. According to the rules, all LEGO Robotics teams must be student-led and taught, but may have an overseer, which is where Amy comes in.

Involved for the past four years, Amy is assisted by Talya M. and Yu-Lin Y. (both ’18) who have each been mentoring the Penguin Squad for three years while Carolyn V. (’19) was a co-head of the team this year. 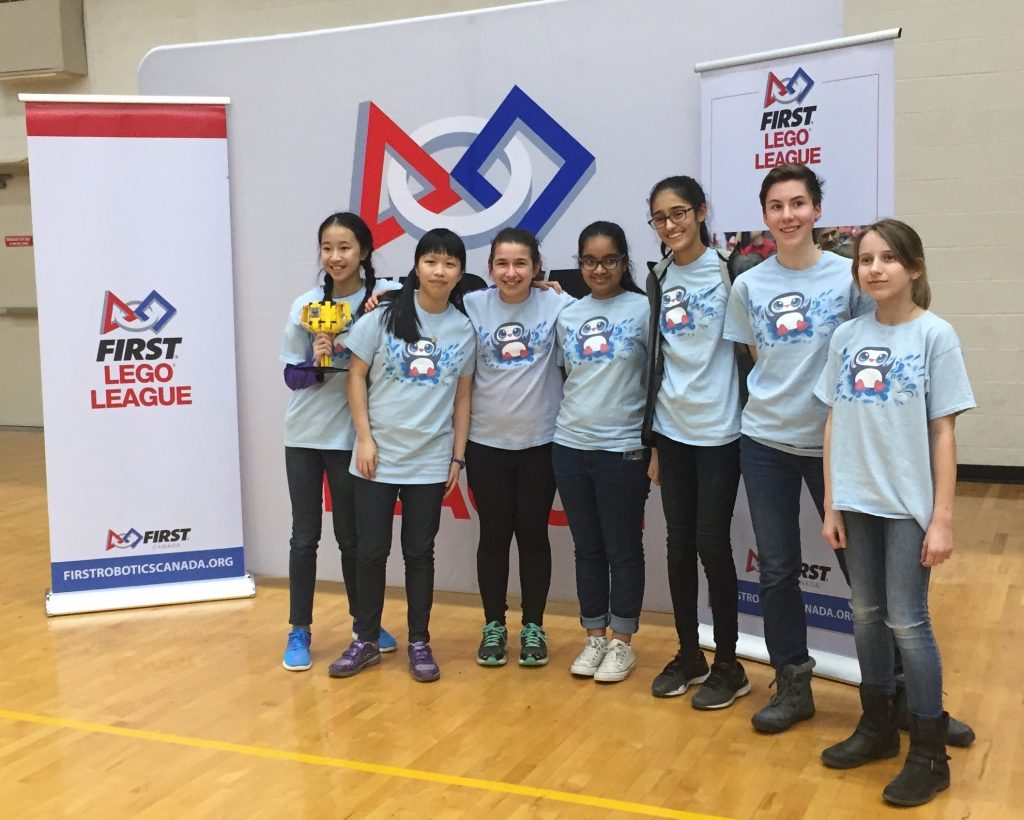 Although the robotics competition season doesn’t begin until the start of the school year, “spring training” for the teams starts in March and runs until the end of the school year in June. This gives the girls a good foundation for the commencement of tournament preparation in September.

In the world of LEGO Robotics, the key competition is the FIRST LEGO League. With more than 250,000 participants in 88 countries, competitors are tasked with researching a real-world problem and then challenged to develop a solution. These problems can be anything from recycling to food safety. They must also design, build, and program a robot using Mindstorms technology with which they then compete on a table-top playing field.

At the FIRST LEGO League qualifying tournament, the Penguin Squad (comprised of Claire F., Heidi H., Priya S., Kyran S., Ariana G., Jasmine L. and Sophie B., all ’21) received the Robot Design award for having the most innovative and repeatable design with good construction and good programming. The team succeeded in qualifying for the provincials. 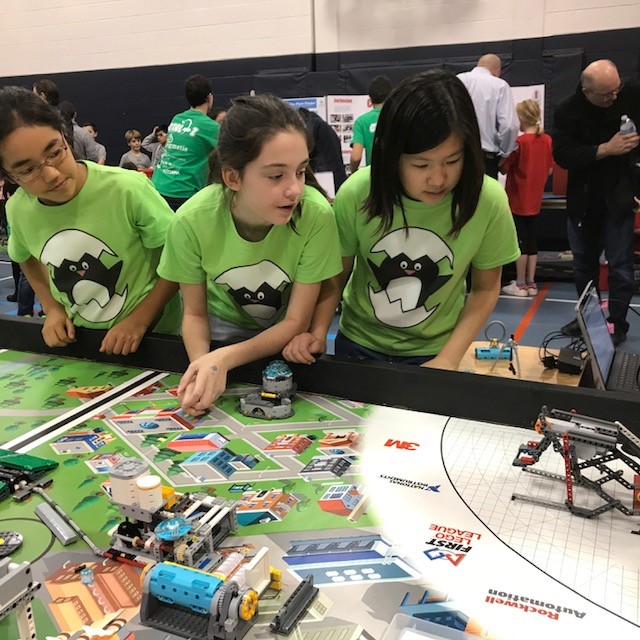 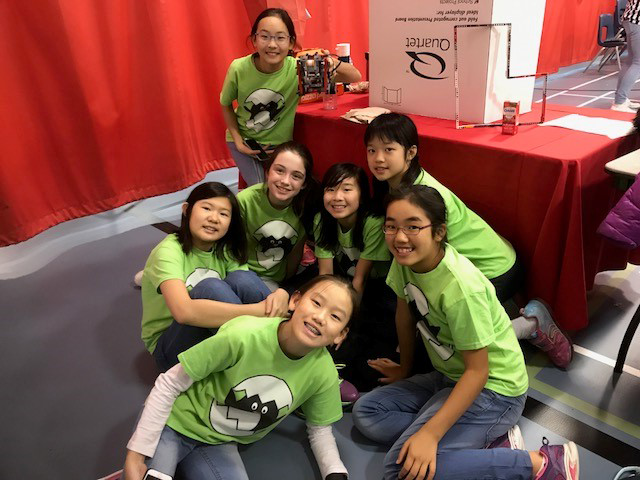 A robot that fails – for the win!

LEGO Robotics isn’t the only platform at St. Clement’s School. VEX Robotics, aimed at middle school, high school, and college/university students, attracts more than 11,500 teams from 40 countries competing in over 750 tournaments a year.

SCS computer science teacher Shawn Lim is the staff supervisor for VEX and is something of a pioneer in educational robots. As a student himself, Shawn was a member of the very first Canadian competitive robotics team at Woburn Collegiate Institute and decided to pursue a career in the field. He firmly believes that robotics is a good way to teach what he feels are the greatest predictors of future success: grit, perseverance, and resilience followed by confidence and passion. 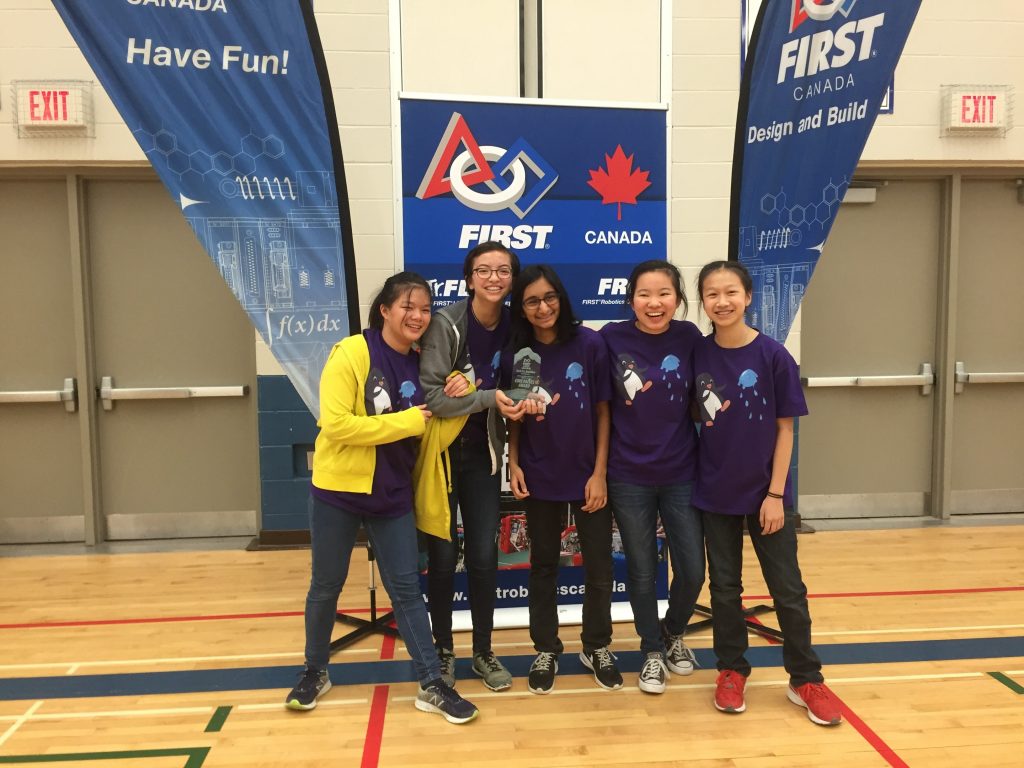 “Robotics is an exercise in falling down over again and again,” he explains. “No one’s first robot ever works. It’s guaranteed to fail. That’s just part of the process.”

However, it’s those failures that are amongst the greatest benefits of learning robotics, Shawn believes, rather than the successes.

“One of my most valued teaching philosophies is building simple robots that work 100% of the time,” Shawn adds. “Rather than complex ones that don’t work reliably. Once you master the simple robots, then move on to the complex ones.”

SCS had four teams at the February 3, 2018 VEX Robotics Competition Qualifying Event in Mississauga where they competed against 75 teams from across the GTA – including some former world champions.

One of the SCS robots was a very intricate and functional robot that was amongst the most ambitious that any SCS team had ever attempted. The appropriately named Big Bertha started off at a diminutive 18” but soared to a towering 6-feet with the help of a scissor lift.

As educational robotics is traditionally a male-dominated field, when Shawn first arrived at SCS he wasn’t sure just how much interest there would be in the program. Within a short period of time his mind was put to rest when he found that 41% of Grade 10 girls were either in his robotics or computer science classes.

Among SCS’s most enthusiastic robotics students are Katrina U. and Samantha S., both ’23.

Katrina and Samantha’s passion for robotics extends well beyond SCS. Earlier this year, Katrina and Samantha’s team, SK Creations, competed in the VEX IQ Challenge. After participating in four regional competitions and earning seven awards, they qualified to participate in the Ontario VIQ Provincial Championship held in early March.

Despite the fact that many of the other teams had five or more members and full-time coaches, Katrina – the chief programmer – and Samantha – the chief builder – were awarded an unprecedented four awards including VEX IQ’s Middle School Excellence Award, the highest award presented in the challenge. They also received the STEM Research Project Award, the Create Award, and the Teamwork Second Place Award. With all of that success came qualification for the 2018 VEX Robotics World Championship – VEX IQ Challenge Middle School Division, held in Louisville, Kentucky in late April and early May. Out of the more than 16,000 teams that participated in the VEX competitions, only 1,000 qualified for the World Championship where Katrina and Samantha finished an unbeaten 63rd out of 398 teams.

Their receipt of the Excellence Award also earned them an invitation to participate in the 2018 CREATE U.S. Open Robotics Championship in Council Bluffs, Iowa in early April. There, Katrina and Samantha were one of 69 teams at the event and the sole Canadian entry and came away with the Design Award.

Having experienced firsthand the importance of STEM Education for girls and the benefits of participating in robotics, late last year Katrina and Samantha launched their “16 x 16” fundraising campaign through GoFundMe in an effort to increase the number of young girls who participate in robotics. It is their intention is to raise enough money to send 16 girls to Robotics summer camp before they turn 16 years old. By March, they had sent one girl to camp and had raised sufficient funds to send three more during the summer.

With the end of the competitive robotics season in May, Katrina and Samantha hung up their controllers and returned to volunteering at inner city schools where they introduce robotics to Grades 1 to 4. They also plan on teaching basic robotic building and programming at one of the TDSB summer camps.

Katrina and Samantha’s success, drive and determination have not gone unnoticed as the girls were featured in The Globe & Mail ( Robot-building 12-year-old girls on a mission to encourage others – The Globe and Mail ) on December 8, 2017.

While robots may indeed be the way of the future, St. Clement’s School is working hard to ensure that they are very much a part of today. 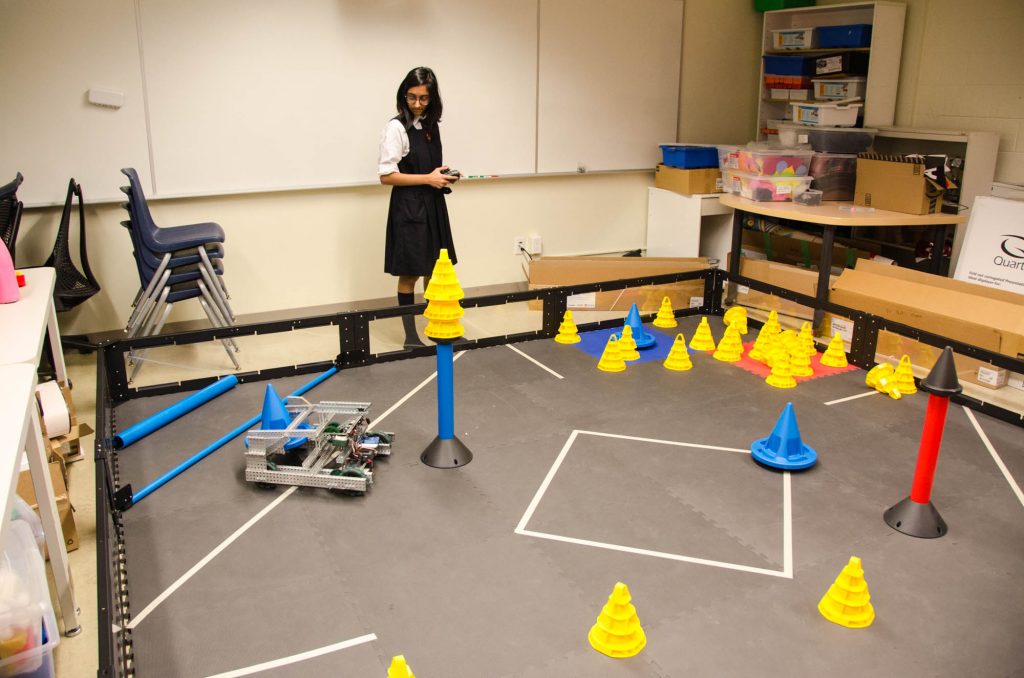 And, check back soon for another edition of #SCSSpotlight, where we profile a different student, initiative, or interesting event!