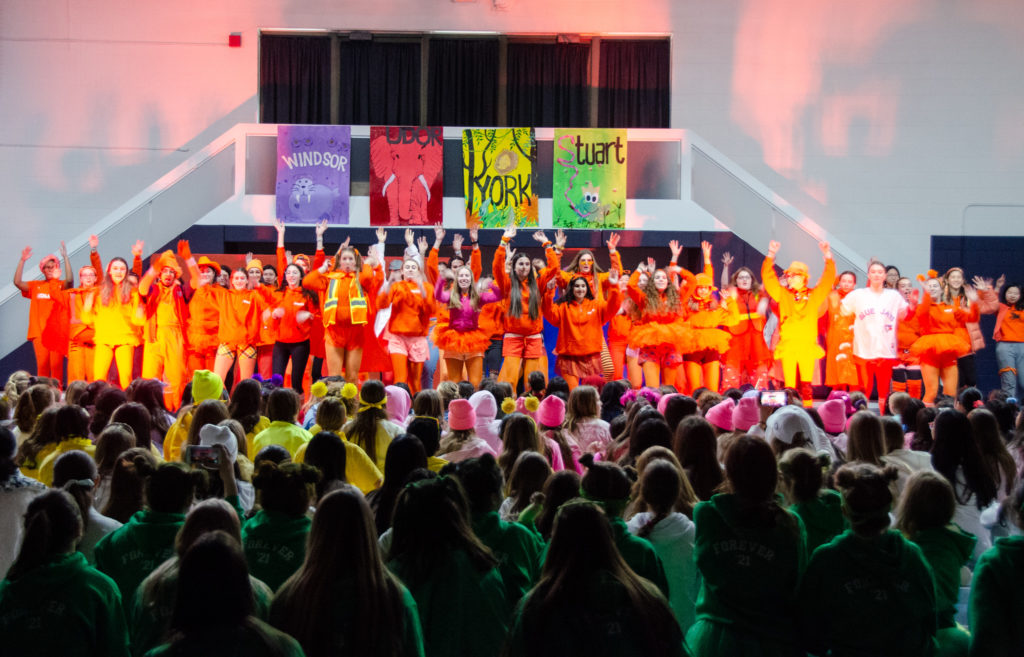 On the second floor of St. Clement’s School today, there was a trail of small, neon-bright yellow feathers. They wound lazily from the stairwell before disappearing beyond a row of red lockers. Despite unusual things often appearing at SCS, such a sight would normally still raise an eyebrow or two, but not this week.

Today is the culmination of Spirit Week at SCS. Although there’s always spirit a-plenty around here, this annual celebration knocks it up a notch or twelve. Beyond the usual buzz of excitement that visitors to the School never fail to notice, there has been an extra degree of energy over the past five days that’s positively infectious.

No one is left out of Spirit Week. Each grade – and even staff – are fully committed to the occasion. There’s a specific colour for each group that makes its initial appearance from the knees down, spreading upwards with each passing day. By the end of the week, the riot of colour is evident from top of head to tip of toes in a vibrant palette of purple, pink, yellow, orange, silver, green, red, and more, from vibrant sneakers to feathery boas, iridescent tutus to pastel-hued hoodies.

The treats were not merely visual, however, as each grade tirelessly and enthusiastically rehearsed their chosen songs for the impeccably-choreographed lip-sync contest. With a movie theme, the beats of everything from Frozen to Footloose echoed throughout the building before the final competition at the Friday assembly and co-curricular time.

Lockers were brilliantly decorated not just with paint and great artistic efforts, but with lights, music, and spectacular 3-D effects as the spirit for which SCS is renowned and which binds the grades from 1-12 took over the halls and raised the roof.

Although there were winners in different categories, the clear winner was St. Clement’s and all those fortunate enough to call it their own.