HomeNews & MediaThe Gift of Giving Back: No One Has Ever Had Giver’s Remorse
POSTED:Dec 2, 2019 CATEGORY:Inside Our Walls 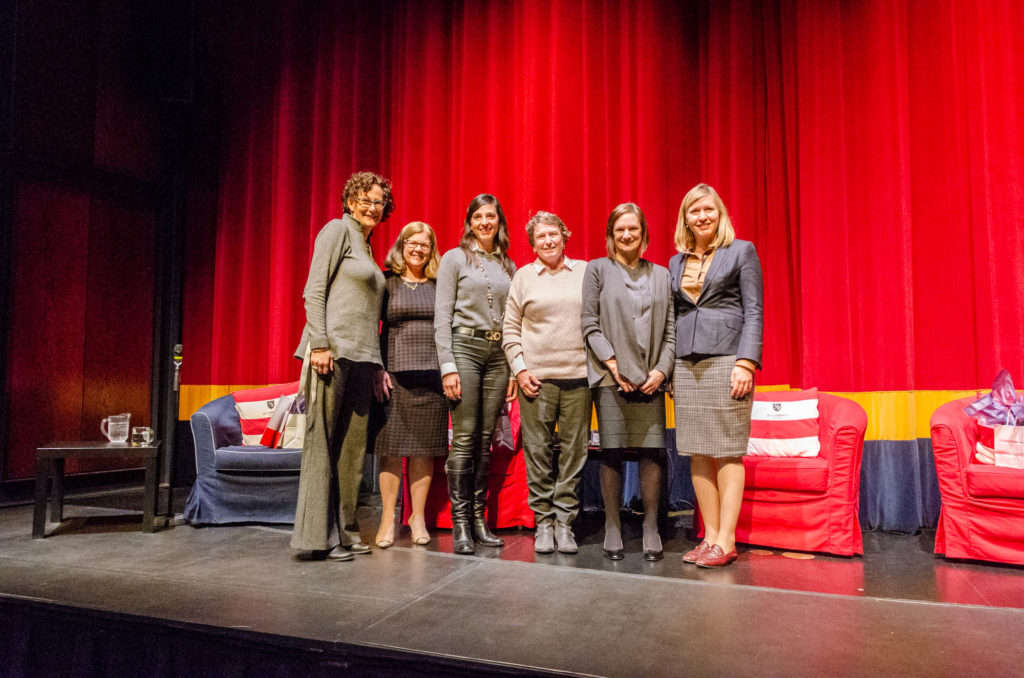 Last Thursday, November 28, St. Clement’s School was privileged to host our first Women and Philanthropy event, an engaging panel discussion focused around women’s involvement in philanthropy and the changing face of charitable giving.

SCS welcomed our moderator and four panelists to Powell Hall:

Jo-Anne set the stage for the discussion by explaining that in 2014, TD realized Canadian-specific research on women and their role in philanthropy was lacking. This was a particular problem because women are gaining in wealth; as of 2016, women controlled 35% of the wealth in Canada, a figure that is projected to hit 50% by 2026. Furthermore, Jo-Anne shared, women live longer than men and so they often end up inheriting twice: once from parents, and again from a partner or spouse. In addition, there are also more female entrepreneurs than ever before.

It was with all of that in mind that TD determined the importance of commissioning research in order to better understand how and why Canadian women were motivated to give. That research concluded that women give differently than men, that they want to cultivate relationships with an organization or charity, and support causes for which they are personally passionate. Oftentimes, women will volunteer for a charity before making a major gift.

The panelists at SCS all shared that the idea of giving back was part of the fabric of each of their families growing up. While their parents and grandparents did support organizations monetarily, the time spent volunteering for causes for which they were passionate made more of an impact. Now, as adults, they choose charities to support based on their own interests and passions. For example, while Anne works in the investing sector, she wanted to stay connected to the arts since she has a degree in art history. She currently sits on the Board of Directors at Crow’s Theatre, Canadian Opera Company, and Toronto Public Library Foundation. After holding various roles at SCS for over 32 years, Wendy continues to support a number of charitable organizations (including the School) that provide opportunities for girls and young women, as well as organizations that offer educational opportunities for people of all ages.  She also volunteered with YMCA Geneva Park; her family’s philanthropic connection to the YMCA has spanned multiple generations.

At TD, Jo-Anne encourages clients to create a philanthropic plan that reflects their values. With a plan in place, you can have greater impact, and it’s also easier to say no to requests that fall outside of that scope. Julie reinforced this notion; the Pierre Lassonde Family Foundation was set up with three pillars – the arts, the community in which we live, and education – as directed by her mother before she died. The foundation only considers organizations that fall under one of these categories. In further support of TD’s research, a Lassonde family member is personally involved with every one of the charities the foundation donates to financially.

This was a notion that all of the panelists came to reinforce throughout the evening – philanthropy for them is not just about being able to write a cheque, but to make an impact with an organization that they feel personally connected to and passionate about. Women continue to represent a growing and influential force to be harnessed by the charitable sector, as was demonstrated by the women sitting on stage in Powell Hall and supported by the research TD undertook. Women who give back are poised to have a significant, ongoing impact on society through their demonstrations of philanthropy.

The evening’s discussion was also timely given that tomorrow, December 3, is the 7th edition of Giving Tuesday in Canada! Giving Tuesday is a global day of giving, and a time to encourage activities that support charitable organizations like SCS. Donations to our Annual Fund help shape the experience of our girls by allowing for academic enhancements, facility and technology upgrades (like new furnishings for classrooms), and by providing deserving students with the opportunity to receive an SCS education through our Financial Assistance program. In addition, CanadaHelps will give an additional gift to SCS for every donation received on December 3, so please make your gift online!

For anyone who was not able to join us last week, we are pleased to share a video of the discussion!