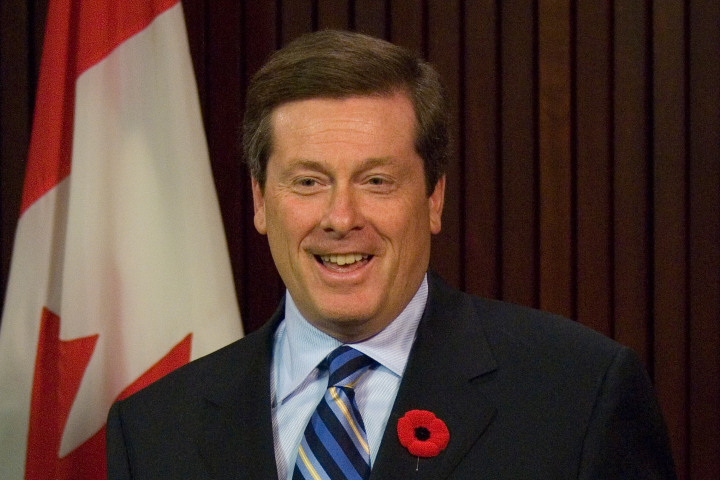 In late September I sat down with John Tory and asked him some questions about his campaign. The Toronto native was elected Toronto’s Mayor on October 27, 2014.

1. What legacy do you want to be remembered by if you are elected mayor?

I want to build SmartTrack to get Toronto Back on Track. Building 22 transit stops in Toronto and providing better transit for Torontonians is a legacy I would be proud to have.

2. What is the first thing you will do when you arrive at City Hall?

The first thing I will do at City Hall is get council working together again and focus on important infrastructure projects in the city. The provincial and federal governments have both agreed to build the Scarborough subway, and I will to work with them to achieve this.

3. Do you have any advice for aspiring politicians?

Get involved – I first got involved in politics at a young age through canvassing for a local candidate and have learned so much through a variety of roles. The best way to understand what goes into a campaign and getting elected is to start now. There are many ways to be civically engaged; I encourage you to get involved in any way you can.

4. What has been a highlight of the campaign? Have there been any disappointments or surprises?

Every day there are surprises along the way. The best moments for me have been when I am out meeting voters and hearing about how they, too, want Toronto Back on Track. I love hearing that my ideas are resonating with voters and when people are excited about the election. We have a great team on the campaign, and I love going out with such a great group of volunteers. I encourage anyone looking to get involved to come out and hear what people are saying. Campaigning is a lot of fun and a great way to get to know Toronto.

5. Why should we elect you as our mayor?

I have a positive vision to get Toronto Back on Track. My SmartTrack plan will bring 22 new transit stops in just 7 years, which will help relieve congestion and bring transit relief that is desperately needed. This will make a huge difference to [our youth’s] future in Toronto. You will now be able to choose to live in one part of the city and have an easy way to get to work in another part. It will help bring jobs and growth to Toronto, which is important for the future of the city.

6. What differentiates you from other candidates?

I think the main difference between me and the other candidates is the fact that I have a vision and I will work with City Council and the other levels of government to get things done. I have a good long-standing working relationship with both the Provincial and Federal governments. Galvanizing big projects in Toronto requires engaging and working with all three levels of government. I am the only candidate who is able to say I can work with both governments to get moving on the things important to our city. Without the City Council working together in the past four years, we have seen what can happen. It is crucial to have a leader who can bring people together for the best interests of Toronto.

7. What is an issue that has affected you personally, and why do you want to change this issue?

The issue of inequality between different neighborhoods in our city is an issue that is very important to me. I believe that many areas in our city need to have a stronger voice in government to help them move forward with the rest of Toronto. We need to be One Toronto and that is something I am committed to working on to help those less fortunate in our city.

8. If you had an unlimited budget what would you do?

I want to help fix the state of transit. We should have been building a transit stop every year to keep up with the growth of our city. We have a lot of catching up to do, especially in certain parts of the city, such as Scarborough. There are many transit projects that have been talked about that would be great to get started on. Unfortunately, with tough budget limitations, we can’t start building all of them right away. I have decided to prioritize SmartTrack in order to bring real transit relief.

9. What will be the most difficult part of your job as mayor?

There have been so many good ideas discussed in this election and there are many things I would like to accomplish. My main priority will be SmartTrack. I believe it will make a big difference to a large number of Torontonians. There are, however, other projects we need to consider as well. We will have to think carefully about how to balance all the competing priorities in the city.

10. What political leader in history do you admire the most?

The political leader I admire the most is former Premier Bill Davis. He was a mentor of mine and a great Premier for our province.

11. Ms Stinz, Mr. Rob Ford and Mr. Soknacki have recently quit the mayoral race. Has this affected your strategy or changed the way you are approaching election day?

I am focused on my positive message to get Toronto Back on Track, so my strategy has not changed with candidates leaving the race. My team and I campaign every day as if we are 5 points behind in the polls and are focused on our strategies to get us to Election Day.