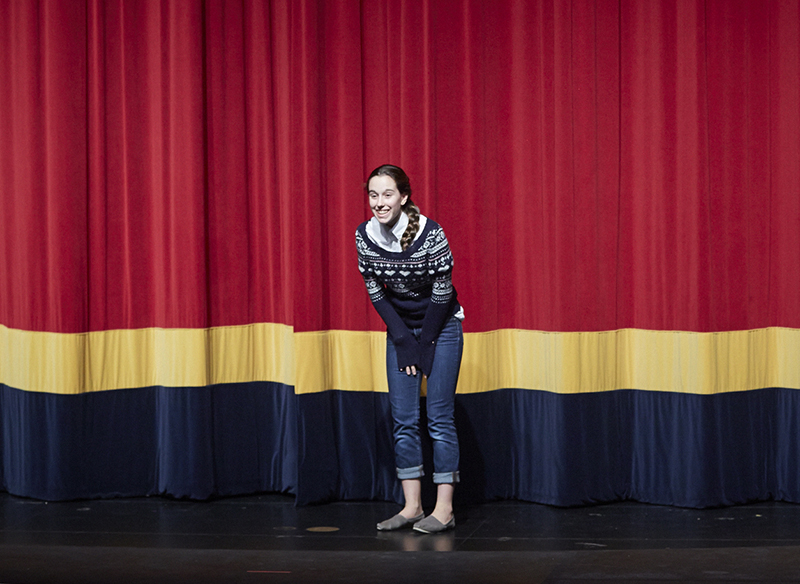 Our first performance of the year at St. Clement’s was fittingly called Setting the Stage. The senior drama students stepped from the wings onto centre stage in Powell Hall – a first for many of them.

This year, the Dramatic Arts Classes presented scenes from Wendy Lill’s play Sisters as part of the “Women in Canadian Theatre” unit. Combining textual analysis and imagination, the students first created a rich character biography. Next, they applied their knowledge of the Stanislavski method of acting which requires the actor to understand the objective of the character. Using this information, they assembled costumes and blocked the scenes.

Famous females were the inspiration for a series of docudramas produced by our Grade 10 drama students. Small groups of students selected a female household name such as J.K. Rowling, Princess Diana, and Ellen DeGeneres, and delved deeper into her story, sharing little-known facets with the audience. Factual information collected from newspaper articles, speeches, and other primary sources formed the basis of each group’s original script. Students then employed a variety of theatrical techniques to support the story, create mood, and better engage the audience, bringing these well-known women to life on stage.

Setting the Stage was held in Powell Hall on November 13. Be sure to return to Powell Hall for the Middle School production of Anne of Green Gables on Thursday, November 20!