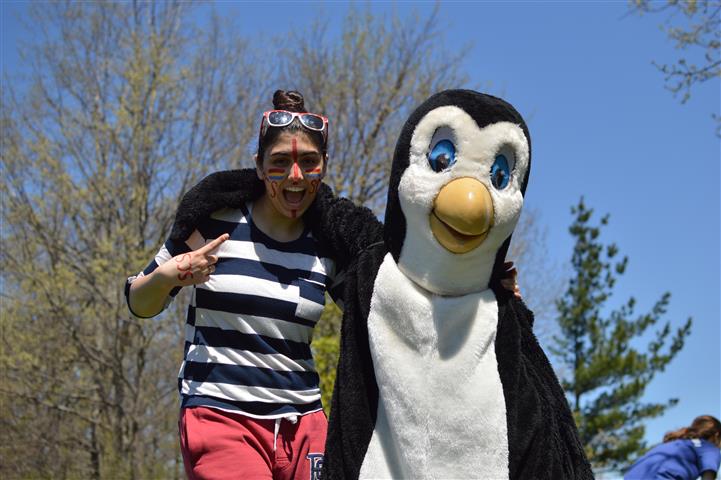 SCS is kicking off the school year with a little friendly competition – it’s time for Post City’s Mascot Rivalry 2014! The mascots from independent schools around Toronto are currently locked in a head-to-head battle for school spirit bragging rights, and our own Penguin needs your vote to come out on top!

Visit www.postcity.com/Mascot-Rivalry-2014/ to cast your vote. You’ll have to make it snappy – the first round of voting runs until Tuesday, September 16th. The winners of each category will then duke it out in a final voting round for a school visit by Toronto’s own top mascots: the Raptor and The Leafs’ Carlton the Bear.

There are many reasons to vote “yes” for Penguin, also known as one of the world’s most recognizable and beloved birds. In addition to an innate ability to pump up a crowd at SCS, penguins boast many cool traits other birds just can’t match. Love the water? Penguins are the Michael Phelps of the bird world – their powerful flippers and streamlined bodies make them the fastest swimming and deepest diving species of any birds. That sure makes up for having lost the ability to fly millions of years ago!

Also, penguins are happiest when surrounded by their peers – they are very community-minded! (Another reason our Penguin fits in so well at SCS). Highly social, penguins form colonies numbering in the tens of thousands. That’s a lot of penguins in one neighbourhood. The colony may call the same nesting grounds home for thousands of years. Despite those numbers, it’s not easy to get lost in the crowd – parents and chicks use their superb hearing to easily keep track of one another.

It’s clear there are numerous reasons why penguins come out on top. Show our Penguin some love and vote today!