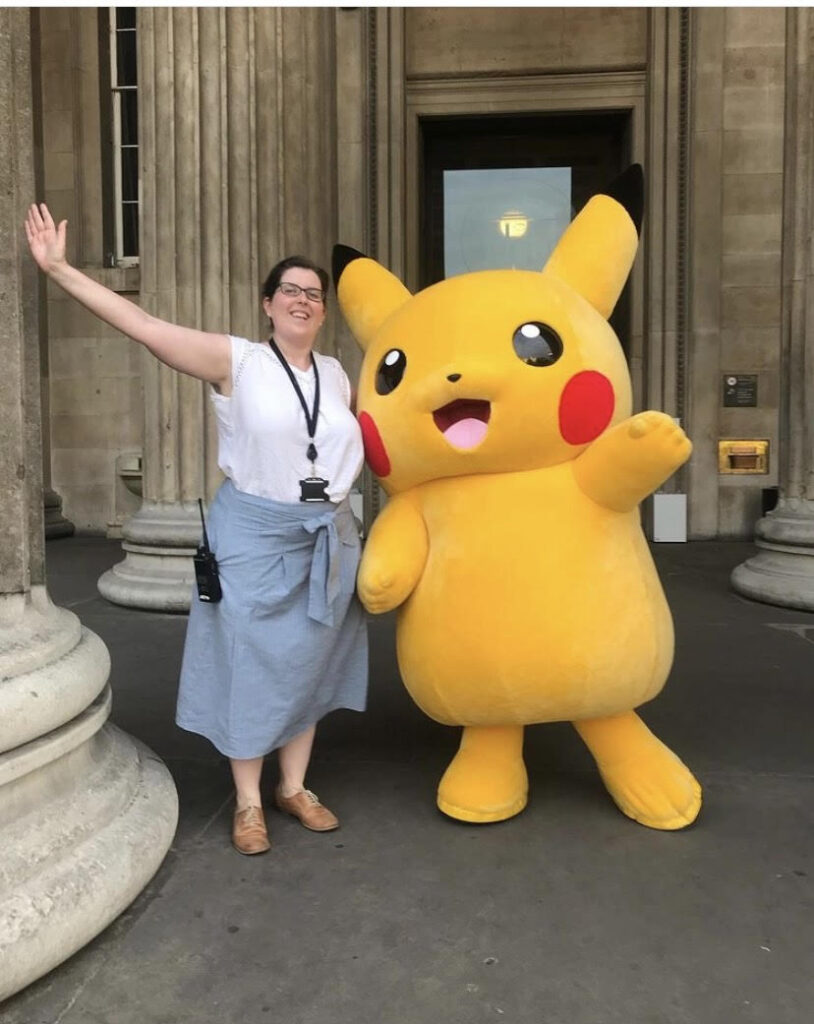 The doors to London’s British Museum may currently be closed due to COVID-19, but that didn’t stop Ms Chisholm’s Grade 4 class from having an exclusive behind-the-scenes tour with a St. Clement’s alumna.

Angela Wright ’06 is the museum’s Events Manager and joined the class virtually from London. She shared secrets of her job and tales of some of the museum’s more than 8,000,000 objects.

Her passion for museums stretches back to a trip she took with a group of other SCS students for a summer course credit. “We spent two weeks in Rome and two weeks in Florence,” she recalled. “We visited galleries, museums, the Vatican, and saw lots of Roman ruins. One place we visited was Pompeii which was really exciting.”

Pompeii was a bustling city not far from Naples. In the year 79, Mount Vesuvius erupted, burying it beneath metres of volcanic ash and pumice while encapsulating a slice of daily life for future archaeologists.

Visiting Pompeii was a life-changing experience for Angela.

“It was so amazing to walk where they had walked, to see what life was like back then,” she said.

When she returned to SCS, Angela studied art history and Latin and was enthralled by artefacts that provided a glimpse of life long ago. She then attended Queen’s University and worked at the oldest house in Toronto, Campbell House, which hosted concerts, plays, and cooking events featuring cuisine from the 1800s.

In 2017 Angela made the move to London, England and was hired by the British Museum.

The museum was established in 1753 and was the first public national museum in the world. Each year it is visited by more than seven million people, yet entrance is free of charge. One of the things the museum does to finance its operations is to host private events after-hours. That’s where Angela comes in.

“We have to protect and preserve the museum collection, show it off, and educate the public,” she explained. “Yet we must make sure that it will always be free to visit.”

Using its beautiful architecture to full effect and some of its most famous artefacts as a backdrop, the museum plays host to all sorts of events.

“We work with scientists, curators, and chefs to be really creative,” she explained. “We once had giant helium balloons and acrobats suspended from the ceiling of the Great Court, the largest covered space in Europe.”

Angela helps to get everything ready for the big events.

“We have to make sure that nothing gets damaged,” she said. “We must ensure the safety of both the public and the objects. After that, we have to put everything back in its place before the doors re-open the next morning.”

Angela once escorted Pokémon character Pikachu around the facility for a Manga exhibition and was involved in a visit by Queen Elizabeth II.

“Did you go crazy inside when you saw Queen Elizabeth?” asked Kayla J. ’29.

“I was so nervous,” Angela admitted. “We had so many practices and dress rehearsals. The Queen was so nice though. She has done that sort of thing all of her life.”

While the events can be very exciting, Angela’s favourite experiences are of a quieter nature.

“I love being alone in the museum at night,” she said. “I have keys to every area and once everyone is gone, I have the whole place to myself. It’s very much like the movie Night at the Museum, although I haven’t actually seen anything come to life yet.”

Angela has many favourite items in the collection, and she shared a few with the class, including a mummified crocodile from Egypt.

“It’s 2,000 years old,” she pointed out as she showed a photo. “If you look closely you can see baby crocodiles on its back.”

Serena T. ’29 she had just watched the movie The Dig with her family and wondered if Angela had seen the Sutton Hoo helmet.

“I have,” she said. “It’s really cool. The museum’s curators worked on the film to ensure that parts were historically accurate. The Sutton Hoo discovery really changed how people viewed those ancient times as it showed that the Anglo Saxons were more sophisticated than thought.”

Although Angela misses being in the building due to COVID-19, it has provided her with the opportunity to discover the area where she lives, at least from the outside.

“Have you been to the Harry Potter Studios?” Amelia B ’29, asked.

“I was going to go last year,” Angela admitted, “but because of COVID, I couldn’t. Perhaps this year. However, many of the things in the Harry Potter books and films were inspired by real things that J.K. Rowling had seen in the British Museum.”

“Although it’s fiction,” she explained, “a lot of Harry Potter is actually based on fact.”