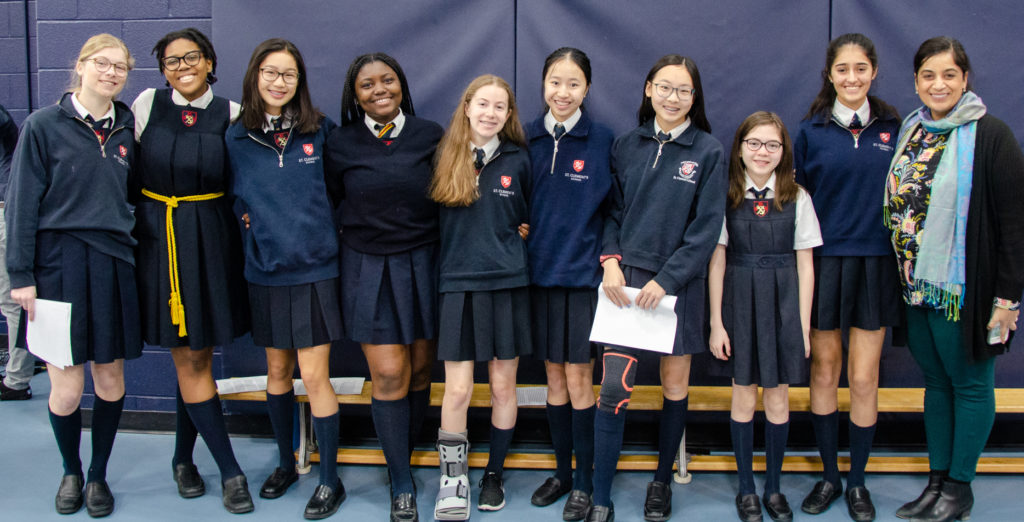 February is Black History Month and was marked at assembly this morning by SCS’s Student Diversity Committee.

“Black History Month is a time to celebrate and recognize the contributions and achievements of Black people,” Jasmine H. ’21 explained. “Although it’s in February, the messages and ideas of this month are important at any time of the year.”

This year’s theme is “Canadians of African Descent: Going forward, guided by the past.” Dara R. ’21 touched on the contributions of African Canadian women including Paulette Senior, Trey Anthony, Viola Desmond, Delvina Bernard, and d’bi.young anitafrika, before focusing on one crucial part of Black women’s identity that is deeply connected with personal self-expression and culture.

Acacia discussed the politicization of Black hair and its misrepresentation in media, art, and popular culture. She explained that the way Black women wear their hair has to do with so much more than mere fashion and is deeply rooted in social oppression, abuse, and racial discrimination, even today.

“While we may think these forms of racism and discrimination happen only in the United States, there are many cases that happen here in Canada,” Audrey T. ’23 pointed out before describing two Canadian women who were recently subjected to discrimination in their places of work because of their hair.

Priya S. ’21 talked about Simone Wright, a dancer, fashion inspiration, business woman, and activist who created a photo project that shared archival images of Black hair along with photos of herself, her family, and her friends.

“When asked what she hopes will change about Black hair in our culture, she replied that she wants people to understand that wearing ‘natural hair’ into the workplace should not only be acceptable, it’s a person’s right. It is about allowing people to feel strong and comfortable in their own skin.” Priya said.

Camille L. ’21 talked about the Oscar winning short Hair Love, while Ella R. ’23  introduced Sharee Miller’s book Don’t Touch My Hair, which was then read out loud by the entire Student Diversity Committee.

The assembly ended with Reneyah B. ’20 describing some of her own experiences. “I challenge each of us to examine our biases when we may see someone’s hair as different, bad, and unkempt, while at other times it may be cool, like some kind of fashion fad,” Reneyah offered. “Because hair is about that person and their individual identity.”