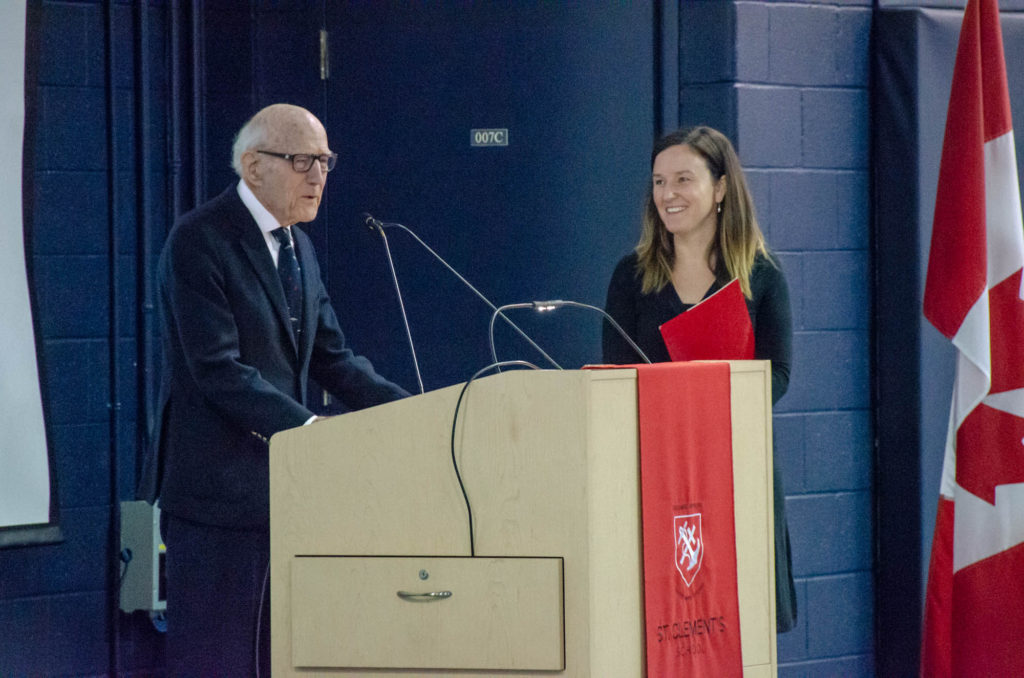 I am writing this blog entry on Remembrance Day, and the 100th anniversary of the end of World War One. As I do, I reflect on our own St. Clement’s School Remembrance Day Assembly at which we were blessed to hear from Mr. John Grant- great uncle of SCS teacher Ms Nora Scott. His presence was inspiring.

As Ms Scott said during introduction of her Great Uncle, the stories of individuals are a powerful reminder of the personal sacrifice that thousands have made throughout history in order to ensure that we have the opportunity to live, learn and work in peace.

Mr. Grant was a Sub-Lieutenant Commander in the Royal Canadian Navy, serving on three different ships- two corvettes and one destroyer- throughout the Battle of the Atlantic, one of the longest continuous battle of the World War II.

During our assembly, Mr. Grant spoke about the importance of remembering or ‘bringing things to mind.’ He spoke about Nazi occupation in Europe, and their threat to occupy the United Kingdom and he reminded us of the atrocities inflicted by Nazis on millions of Jews and other targeted groups from the late 1930s until the end of World War II in 1945. Mr. Grant spoke about the necessity for Canada to come to the aid of the United Kingdom and Europe and how thousands of Canadians did.

Mr. Grant explained his role in protecting convoys of ships as they traversed the Atlantic, and he shared a story about meeting up with his twin brother, Frank, a Wing Commander for the Royal Canadian Air Force when they found themselves in Ireland at the same time while on duty.

Mr. Grant’s presence was inspirational- and not just because of his service to our country and by extension to all of us as Canadians- but also because he was born in 1918 and is 100 years old. To witness his energy and to hear his vivid and inspiring stories, one would never know he was a century old.

After the assembly, I asked Mr. Grant about how he has managed to maintain his health and remarkable clarity. He responded quickly to say that he attributes it to four things: faith, family, friends and fun.

As we remember all of those who have fought- or are fighting- on behalf of our country, let us bring to mind the importance of serving others and ensure we express our thanks to those sacrificing their lives for us. Let us also remember that there are components to life beyond ‘things’ that can contribute to a life well-lived.