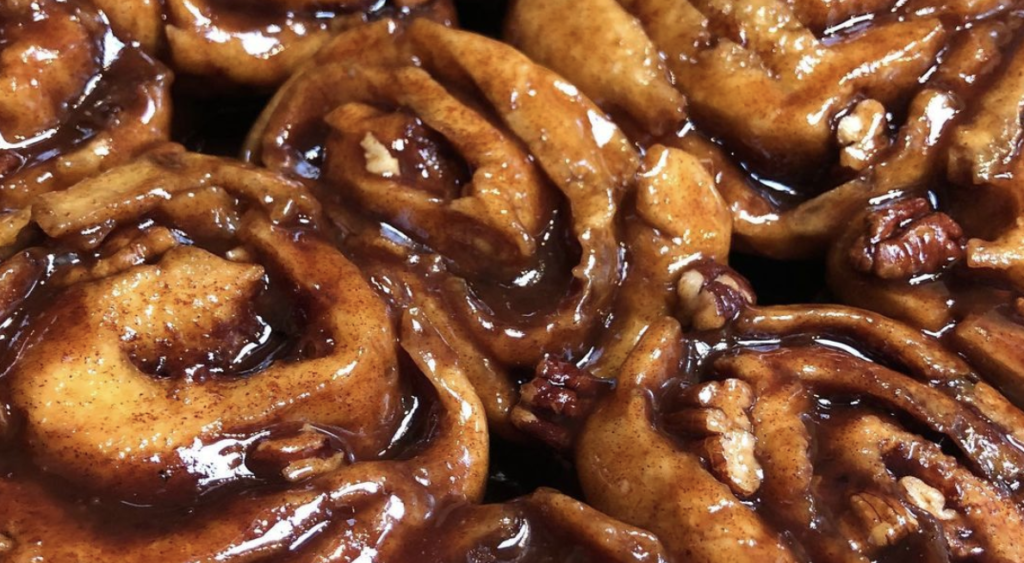 On Saturday, approximately 60 St. Clement’s School community members gathered on Zoom for an amazing hour of cinnamon bun baking. The event was led by Alumna, author, and baker Jane Mason ’84, who is also the founder of Virtuous Bread,  a social enterprise to effect positive social change through bread. The virtual bake-along was attended by a variety of SCS community members, including current students and parents, current and past staff, and alumnae.

Through the process of baking “alongside” Jane and other members of our community, I experienced my own personal positive change. The experience also served as a reminder of the ups and downs of the learning process itself.

Until Saturday, I had never baked bread or buns. I have made thousands of muffins, hundreds of cookies, but my experience with this type of dough has been nil (unless you count the wonderful times I sat as a young girl with my Dad as he experimented with bread-making.) Even those recollections conjure up memories of attempted loaves gone bad.

I tell you this because, in hindsight, it is interesting, though not surprising, how my worry about doing a good job affected the feelings I had wading into the task.

We were given the ingredients a week before with instructions to have our dough, filling, and ‘goo’ ready prior to the Zoom call. The recipe mentioned using a rolling pin which I didn’t have. While I originally asked to borrow my mother’s, I thought buying my own might just be a rite of passage.

It was recommended that we get our dough ready to rise the night before. Arriving home on Friday I was equal parts nervous and excited.

The recipe provided to us listed ingredients in grams. Apparently weighing ingredients is best when baking. Did I have a scale? Of course not. However, with thanks to Meagan Thomas, our Associate Director of Advancement, I had the link to a conversion tool.

First round of dough was sticky and gooey, and I realized that, even with the conversion tool, I had ‘mis-converted’ and added far too much butter. I started over. My second try brought some relief as I had what looked like a good ball of dough. The recipe suggested putting it in the fridge overnight…but, the next morning, I realized that we were supposed to let it rise BEFORE putting it in the fridge!

An hour and a half before Jane’s bake-along was to commence, my dough had not risen, and I decided that I might just join the call and not bake. How could I?

Here is where the fun starts and an important part of learning. Between texts with Meagan and Lisa Watson, Executive Director of Advancement, who were also prepping, and an encouraging and informative message from Alumna Bryn Kennedy who had seen one of my Tweets about the dough, I was coached along. Bryn wrote, “Dough has to rise in a warm place, Ms Perry! I usually put mine on top of a preheating oven. Otherwise, it kills the yeast. Science!”

While I felt like giving up, I popped the dough into my warming drawer, pushed on and made the filling and the goo.

As I logged on to the Zoom call, I worried that I might be the only one not sure of whether I was prepped or not. Not so. Jane immediately put me and others at ease, walked us through some problem-solving strategies, and guided us as we put our dough, filling, and goo together. Hearing that other people’s experiences and questions were the same as mine as we worked on the final stages together made all the difference.

The result? A delicious, decadent dozen cinnamon buns, a sense of accomplishment, and an important reminder about how any one of us feels as we learn new things. Insecurity, false starts, mistakes, and anxieties may be present, but with support, great facilitation, and an encouraging community, we can and will learn good things.