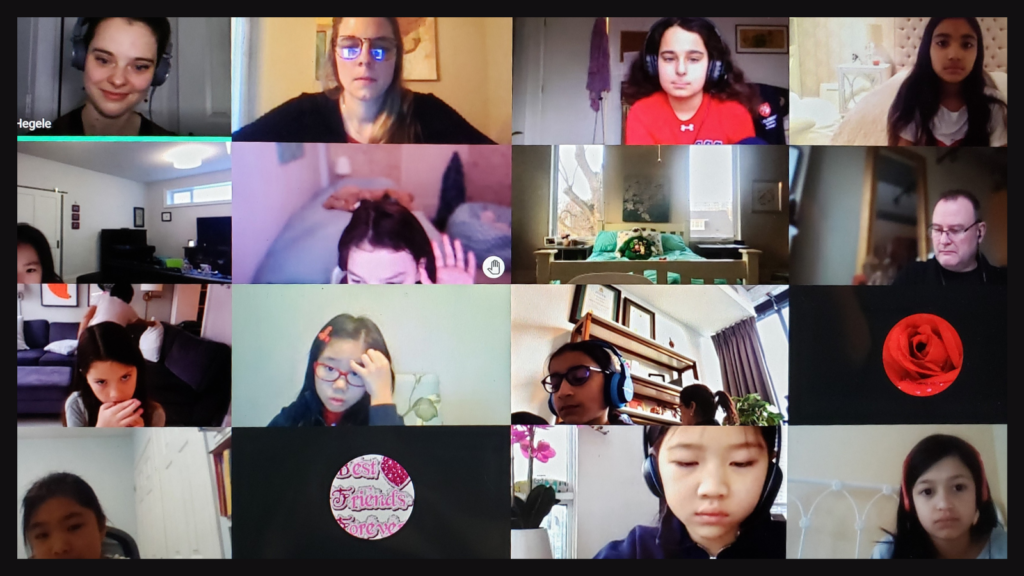 Rose Hegele ’11 has always loved anything to do with sound and knew that her dream was to have a career in music. This week, she joined Ms Chisholm’s Grade 4 class virtually from her home in Boston to share what it means to be a freelance musician.

Rose started learning piano at an early age but it never really caught her imagination.

“The piano is amazing,” she said. “But I was a bit of a strong-willed child and I didn’t really like learning scales. It was too conformist for me. If I’d been able to climb inside and pluck away at the chords, perhaps it would have appealed to me more,” she laughed. Instead, at age eight, she began taking voice lessons and really found her musical niche, although even then she remained a non-conformist.

“I studied classical music including Bach, Mozart, and Beethoven,” she shared. “But I didn’t feel like a classical singer.”

Instead, she was drawn towards contemporary music and greatly enjoyed working with modern composers where she was able to utilize a broader range of vocal skills that include screaming, whispering, and even mouth-popping.

Today, Rose is a freelance musician. As a soprano, she sings opera, sacred music, and contemporary classical music. She solos, performs in a contemporary vocal duo, has provided live accompaniment to silent films on national tours, and was invited to be Artist-in-Residence at Clark University. She returned to playing the piano, and also studied the harp.

Rose attended St. Clement’s for Grades 11 and 12 after having earlier lived in Vancouver.

“SCS is a wonderful school,” she said. “A very creative place. A nurturing environment.”

While at SCS, she attended The Phil and Ely Taylor Performance Academy for Young Artists at the Royal Conservatory of Music, an academy she highly recommends for anyone seriously interested in music. From St. Clement’s, she earned a Bachelor of Music Degree in Vocal Performance and Musical Arts from the Eastman School of Music at the University of Rochester, a Master’s Degree in Contemporary Classical Music from the Boston Conservatory at Berklee, and a Post-Master’s Degree Fellowship from the Berklee College of Music.

She then decided to forge her own path and pursue a freelance career.

“You have to be very flexible to work as a freelance musician,” she explained. “You have to make sure that you schedule your time carefully because some weeks can be quiet, and others very busy. You have to keep track of your time and make sure that in addition to rehearsing or studying or performing, you set time aside for administrative work.”

Rose then sang a few different types of musical excerpts for the class, screen-sharing the musical score as she performed. These excerpts included Aaron Jay Kernis: “Ryokan” from Simple Songs; Erin Gee: Mouthpiece 1; Stephen Ryan Jackson’s “I can feel the universe expanding”; Cathy Berberian’s Stripsody; and Ryan Carraher’s “…most of Us…”

The performance began with a conventional music score that many of the students were able to read and follow along. However, by the end, the scores featured bright colours and words in large and dramatic fonts, which she explained represented rhythm, timbre, and pitch.

The sounds that Rose created also changed, ranging from singing to growling.

“How do you make those sounds with your vocal chords?” Victoria J. ’29 asked, somewhat aghast.

“That’s a great question,” Rose began. “The vocal folds on your larynx vibrate – boom boom boom. The higher the notes, the more they expand, while lower notes cause them to shorten and thicken. The air makes them vibrate and that creates sound!”

Ms Chisholm explained to Rose that because of COVID-19, the students can’t sing the way they normally would and instead they have to explore new ways to be musically creative.

“It’s very similar for me,” Rose explained. “Because of COVID-19, I am having Zoom meetings and rehearsals on-line. When we were allowed to, my duo partner and I would rehearse together in-person, but we would be physically distanced and wear masks.  When that wasn’t possible for virtual choir projects, we would rehearse on-line with a conductor. We would all mute our computers and follow the conductor who would then provide feedback.”

“I have been able to work with other people in really exciting ways during this time and while it can be challenging,” she said, “it’s a case of finding consistencies in inconsistency.”

“Sound is really fun to learn about, but there’s nothing like being together to learn how sound works.”