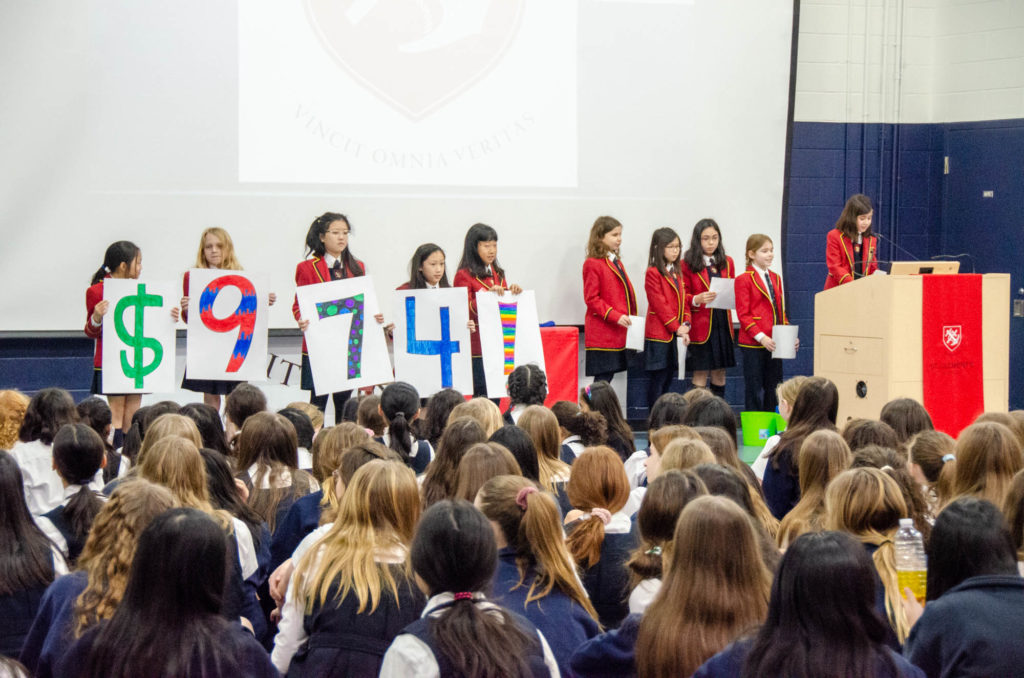 Several weeks ago, while Ms Lamont’s Grade 4 class was studying current events, news of the wildfires in Australia arose. The class was deeply moved by photographs and video of towering blazes, billowing sky-high smoke clouds, devastated communities, distressed and disoriented wildlife, and those who were trying to help them.

“We saw a video of a koala that was confused, injured, and scared,” recalled Lexi T. “As courageous Clementines, we knew we had to take action.”

Desperate to help, the class wondered how they could lend a hand to the people and the wildlife, all too painfully aware that the vast distance between Canada and Australia made the distribution of any aid a challenge.

“We wondered what we could do from so far away,” Rachel M. said. “We believed that doing something was better than doing nothing.”

They considered sending water and supplies, but Ms Lamont explained just how much it would cost to get material goods to Australia, and how long that would take. The class also discussed how to raise the money that any assistance would require. It was suggested that the class hold a school fair with fun games but they quickly realized that that would take a lot of time to organize and they were keen to get their contribution on its way as quickly as possible.

Finally, the class came up with an idea that involved the entire School and a lot of Grade 4 ingenuity and talent.

“Since we learned about the many displaced kangaroos and koalas,” Kaylee W. explained, “we thought that we could make postcards featuring koalas and kangaroos to sell to the SCS community.”

Hard at work, each Grade 4 student created a postcard of two of Australia’s most iconic – and most devastated – species. The postcards were printed and then the class revealed their initiative at a full school assembly and invited students and staff to purchase a postcard to help raise funds. They even offered to deliver the postcards to anyone in the School on the buyers’ behalves.

Postcards were offered for $1 each with all of the proceeds destined for relief efforts in Australia.

“If you feel like you want to donate more than $1 for a card,” Samantha C. said during the Grade 4s’ presentation in assembly, “you may donate as much as you like. Our goal is to raise $100 for Australia with our 100 postcards.”

Tables were set up in the foyer and the postcards were sold throughout the School. The compassion of the Grade 4s was contagious, and the carefully created postcards became such a hot commodity that more were printed.

At assembly on February 4, 2020, Ms Lamont’s Grade 4 class returned to announce how their campaign had done.

With the sale of the final postcard, the total amount raised was $974. However, with a last-minute push, some generous members of the SCS community rounded that up to $1,000 before St. Clement’s School’s Round Square Committee stepped forward and offered to match all contributions dollar-for-dollar. The end result was $2,000 raised by the Grade 4 class for Australia Relief.

With consultation from throughout the School, the class decided that one of the benefactors of their hard work and kindness was to be the World Wildlife Fund. The WWF efforts in Australia have included not just assisting injured and displaced wildlife but also, once the fires have ended, planting 10,000 native trees in critical koala habitat including in the ‘koala triangle’ on Australia’s east coast, the heartland of the healthiest wild koala populations.

The entire project was a massive success thanks to the efforts, talents, and compassion of Ms Lamont and the Grade 4 class.