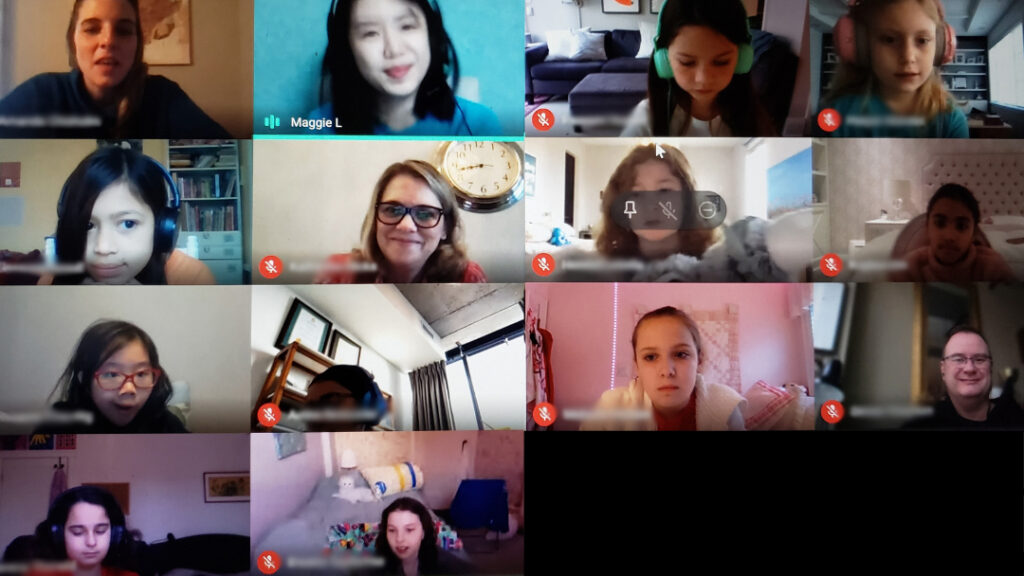 The visit was virtual, of course, and the purpose was to learn about Maggie’s work with the United Nations and the World Wildlife Fund. Even though the students were unable to physically join Maggie on the busy streets of bustling Bangkok, they were warmly welcomed and learned a great deal about Maggie’s efforts to save the world around us.

Maggie currently serves as Asia Pacific Lead – Global Seafood Traceability, for the World Wildlife Fund. Before that she held the position of Programme Management Officer with the United Nations Environment Programme. Although both jobs were based in Bangkok, she found herself working in very international teams.

“My co-workers in Bangkok have come from all over the world,” she explained. “Some have been from places I had barely heard of, and they have been of all ages. The U.N. is very diverse, just like SCS.”

Although that diversity could sometimes make it difficult to reach a consensus, it also meant that working in environments in which people have so many different backgrounds can result in better decisions being reached precisely because of their differing points of view.

“It’s a microcosm,” she added. “A bit like a sandcastle that’s made of many different pieces.”

Much of what Maggie works on pertains to other very small things: plastics.

“Plastics are a big problem worldwide,” she explained. “They are in our oceans everywhere.

“How do you think plastic bags get from your garbage into a whale’s stomach?” she asked the class.

“They could get blown away,” suggested Eleonora G. ’29.

“That’s exactly right.” Maggie said that although most of us believe that if we are disposing of our garbage properly, our bags can’t be a part of the problem, the reality is that there’s always leakage from the system that sees plastics find their way into the sea.

“It’s not as bad from Canada,” she pointed out. “In other parts of the world, it is a major problem.”

“By the year 2050, there will be more plastic garbage in our oceans than there will be fish,” she said. Maggie explained that the best option to prevent that from happening is for everyone to use less plastic in general, and no single-use plastics at all.

“It’s fine to use plastics for long-term things – like computer mice,” she said, as she held her mouse up to the camera. “But it’s not good for things like straws, Q Tips, bags, toothbrushes, or plates.”

Plastics aren’t the only threat to marine life, however. Maggie told the class that some species are under threat of extinction due to over-fishing. Part of her work involves identifying sustainable sources of seafood so that people can still eat fish without endangering species, or advising them how to fish in order to minimize the damage to other species such as turtles.

Maggie arrived at St. Clement’s School in Grade 10 and particularly enjoyed biology and her other science classes. After SCS, she obtained her bachelor of science in food, nutrition, and health from The University of British Columbia; a master of science in nutrition, food science, and technology from The Chinese University of Hong Kong, and a master of science in sustainable management (corporate sustainability), with distinction, from the University of Wisconsin. In addition to working for the United Nations and the World Wildlife Fund, Maggie served as senior scientist – scientific communications (Asia Pacific Skincare) and sustainability program lead for Procter & Gamble.

With much of her current work aimed at changing food systems to ensure that all seafood is sourced responsibly, Maggie explained to the Grade 4 class why it is so important that everyone contributes to making the world a better place.

“We can all do our parts and make a difference,” Maggie said.