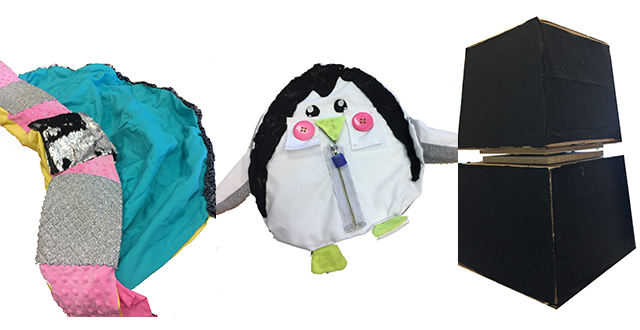 At the start of this school year, SCS’s Grade 12 design students visited a public school in downtown Toronto that had been created in the 1950s for students with cognitive and physical exceptionalities.

The purpose of the trip was for the Clementines to tour the school’s kindergarten classroom and sit in on a class. There they paid close attention to the challenges the school faces with regards to sensory needs, communication, and fine motor skill development. The students then returned to SCS and set about designing products that could ease teaching and learning.

Following a traditional design path of research, ideation, and testing culminating with the final prototype, the students worked closely with the school’s teachers to create products that would assist in their delivery of learning.

Amongst their designs was one for a three-dimensional communications system that came about after the students observed a kindergarten teacher struggling to use several display boards at once. After much thought and a number of revisions, the students created a multi-surfaced display that allows a teacher to communicate with their class in an innovative way.

Earlier this week, the students presented a summation of their Design Thinking process to St. Clement’s students, faculty, and staff that included a full explanation of their design processes utilizing video and the creation of dedicated websites.

Later that evening, their creations were exhibited in the Great Hall of OCAD University to much acclaim as part of the acclaimed week-long annual DesignTO festival.