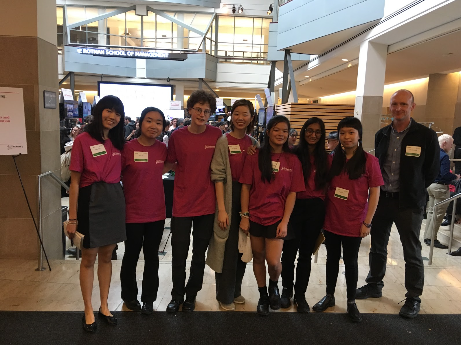 On October 24, the Rotman School of Management at the University of Toronto played host to the fifth annual CDL Machine Learning and Market for Intelligence Conference, and seven St. Clement’s students were in attendance.

The conference offered an in-depth exploration of the current state of artificial intelligence and machine learning, their applications in business, science, healthcare, and beyond, and a discovery of just what the future may hold for these rapidly-growing fields.

Speakers included many industry leaders from international academia and business including representatives from Tesla, Calibra, Uber ATG, Alibaba, Intel, Sanctuary AI, and Creative Destruction Lab as well as the Universities of Toronto, Pennsylvania, Washington, and the University of California, Berkeley.

St. Clement’s School’s access to this premier event was possible thanks to the award of a scholarship in response to the application submitted by the Programming Team and its head, Neha ’20.

“Not only was the SCS team able to hear the talks, but they also had the opportunity to chat with start-up companies who shared some of the misconceptions that they encountered on their routes to success,” explained SCS computer science teacher, Mr. Owain Jones.

One of the companies with whom the girls met was Waterloo, Ontario’s Darwin AI who are currently working on technology for autonomous vehicles.

“Although self-driving cars are safer than humans, many people think that they are dangerous,” the students explained. Darwin informed the students that they want to eliminate this misconception by making autonomous vehicles even safer.

“Currently, since the models are run on the Cloud,” the students reported, “information needs to be constantly transferred between the car and the cloud. Darwin AI is working towards condensing the autonomous car so that it can be stored on the cars themselves. This will reduce the chance of a road collision due to latency.”

The St. Clement’s team also learned about developments and challenges with facial recognition technology; an intelligent stethoscope for smartphones with an app that can analyze heart, lung, and abdominal sounds; and drone and robot controllers that require only one hand to operate.

The SCS team left the conference very excited for the future, but cautious about the challenges that the industry leaders are facing.

“It is clear that there are numerous misconceptions about artificial intelligence,” the SCS students concluded. “In order to address them, we should advise others to compare this field to humans, instead of comparing them to perfection.”