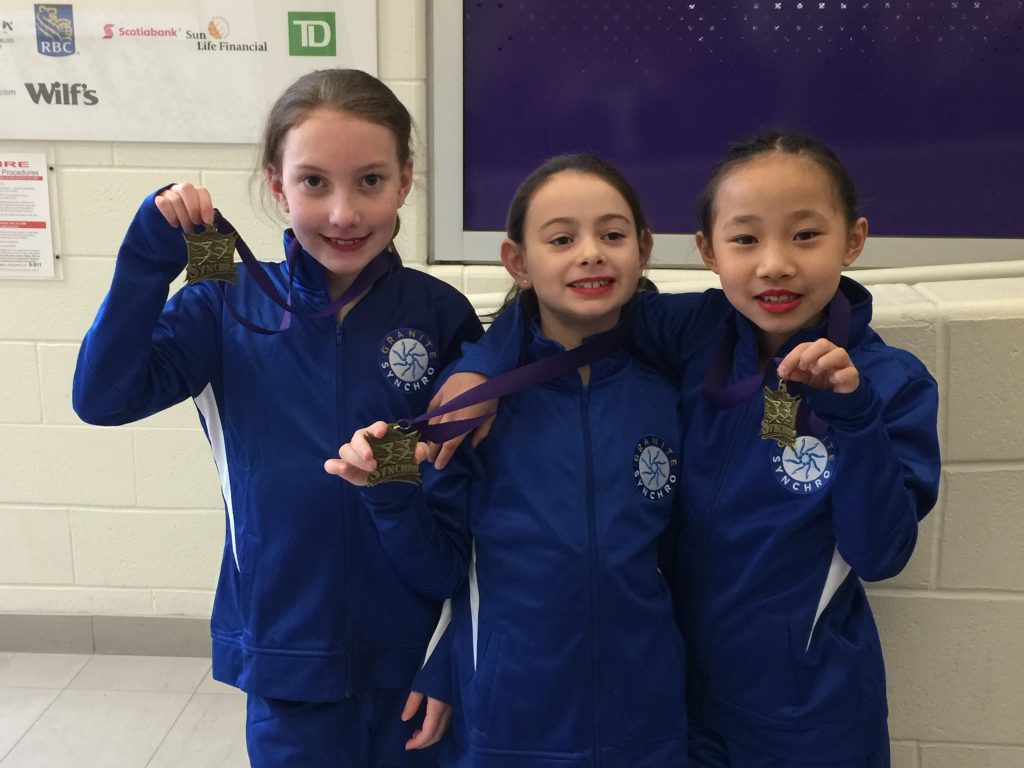 Grade 4 students Paige T., Emily S., and Kathryn W. spend a lot of time together underwater. They first met on dry land – at SCS, to be specific. The school friends decided to try synchronized swimming together three years ago, once they had reached a general level of swimming ability that gave them the option of trying out either swim racing or synchronized swimming. They decided to opt for grace over speed, although both require great strength and endurance in the pool!

While the girls found synchro swimming difficult at first, they got the hang of it soon enough and have all fallen in love with the sport. For the uninitiated, synchronized swimming is a blend of coordinated acrobatics, swimming, and dance requiring huge amounts of core strength, flexibility, artistry, and split-second timing. The bottom and sides of the pool are off-limits, meaning swimmers must continuously tread water to give the illusion they are comfortably standing. Of course, synchro swimmers also need to train to hold their breath underwater for at least 15 seconds at a time! Paige, Emily, and Kathryn train together with their team three times a week; once before school and twice after school for a total of about seven hours weekly.

All that training time is paying off in the pool – at their Synchro Swim Ontario competition a few weeks ago, the girls’ team came first overall, against 13 other Ontario teams! The team of eight swimmers won with a Spanish sword fighting-themed routine. The spirited routine included a variety of moves of varying difficulty, although it didn’t feature one of the girls’ favourites (the Blossom, which is basically a full split underwater with only ankles and feet visible at on the water’s surface.) Competition also dictates no goggles allowed!

The girls would be happy to recruit other SCS classmates to the team – they all feel they are closer friends as a result of being on the team, in addition to being fellow Grade 4s. Asked what they would say to other girls interested in the sport: “Synchro is very fun. It takes a lot of practice – but if you don’t get it on the first try, don’t get discouraged! It’s very cool to be doing lifts in the water as part of the team.”

Check back next week for another edition of #SCSSpotlight, where we profile a different student, group, activity, or interesting event!