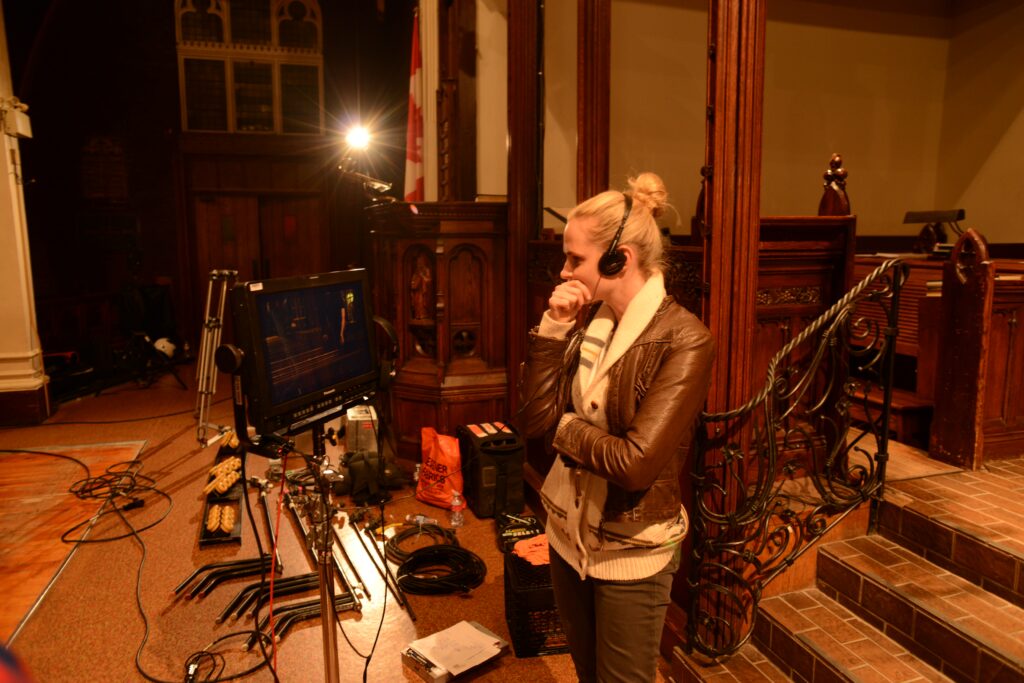 Ms Chisholm’s Grade 4 class took a virtual trip to Hollywood North recently with an Alumna as their guide.

With roles in The Handmaid’s Tale, Kim’s Convenience, Designated Survivor, and Murdoch Mysteries, Ashleigh Rains ’00 has crafted a career in movie and television since graduating from St. Clement’s School. Despite her success in front of the camera, however, Ashleigh also wanted to see what working behind one entailed.

Today, Ashleigh is not only a successful actor, but also a writer, producer, and festival director and grasps every opportunity she can to help Canadians have successful film careers.

Ashleigh came to St. Clement’s from Canada’s National Ballet School and spent the final two years of high school at SCS. Despite no longer being a full-time ballet student, her passion for performing was undiminished.

“I took drama and participated in everything,” she explained, describing her efforts to pursue every performance-related angle possible at 21 St. Clements Avenue. “I was involved in all the plays, and I attended drama classes even if I wasn’t enrolled in the course. I also performed in plays outside the School, including those at Crescent School.”

“I auditioned for all the plays and productions,” she said. “If I did not get cast, I would still be involved in some capacity.”

She tried out experimental theatre and musical theatre, and obtained a degree in drama before heading to the United Kingdom and enrolling in a summer program at the Royal Academy of Dramatic Arts in London.

“Next, I got an agent,” she said. “That got me into more auditions where I would try out in front of casting agents, directors, and producers. You might have 100 auditions a year, and only get a few jobs, but you learn something from each one and then you are better prepared for the next one.”

As an actor, Ashleigh landed roles in a variety of productions.

For all her success in front of the camera, Ashleigh still wanted to see things from the production side.“I wrote a script for a short film and then applied for a Bell Media grant, which I got,” she said. With that funding, Ashleigh made II, which was screened at festivals across North America to acclaim and awards.

Ashleigh continued to pursue production management, taking courses in producing, budgeting, and setting up a production company. She made additional short films and corporate videos, and even a feature: Canadian Strain, which was due to be released last spring until COVID-19 struck.

“We had everything ready for its debut, and then we had to pivot to entirely online,” she explained. “We were the first movie to do so. We had to figure out how to make money online so that we could pay everyone, including our cast and crew.” The movie was shown on iTunes and is currently available on Crave.

Now she must contend with producing more work while the pandemic continues.

“I produced a short film last summer that met all the COVID-19 health and safety requirements,” she said. “Film production is like being part of a big family where everyone works closely together on set, all the departments together like lighting and wardrobe. But now we all wear masks and face shields and we’re physically distanced. We can’t all be on the set at the same time, instead we rotate in and out and watch everything on the monitors.”

Ashleigh shared some of her experiences with the students, from optioning a short story to make into a film, to auditioning for acting parts, or heading to Los Angeles to meet with networks and distributors. One of the things she is most passionate about, however, is her work as the festival director of the Canadian Film Festival, now celebrating its 15th year.

The event, which helps grow the industry here and promotes the skills of students, emerging talents, and other Canadian filmmakers, is very close to her heart.

“I want to do everything possible to help people have successful film careers,” she explained. “It’s a great way to give back.”

Before calling cut on her virtual visit with the Grade 4 class, Ashleigh gave the enthusiastic students one parting thought.