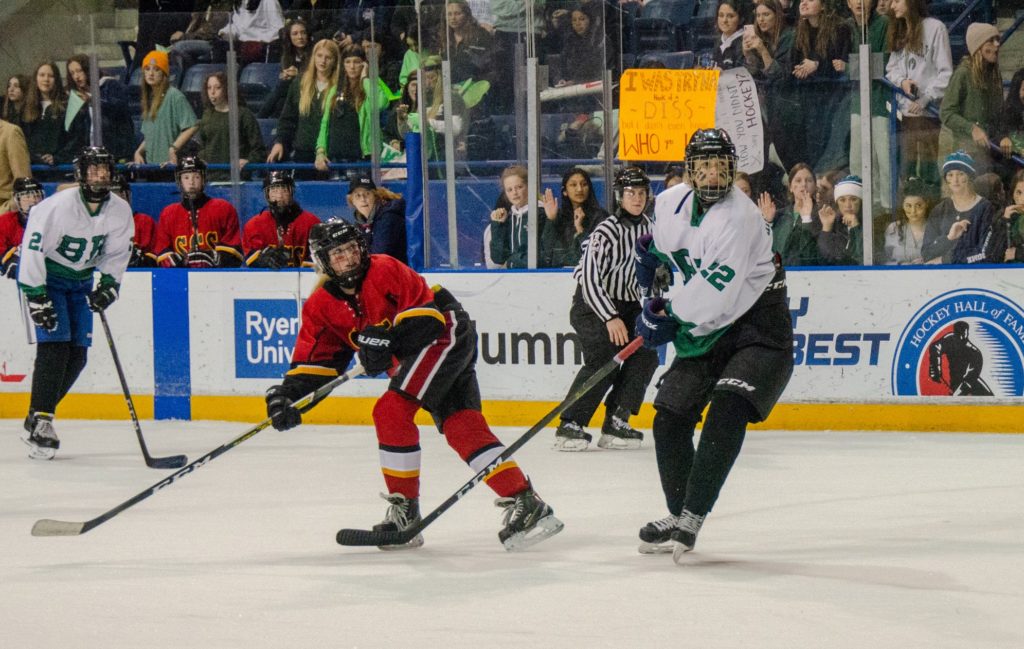 Ice Hockey is one of Canada’s national sports, celebrated from coast to coast, 45th parallel to Arctic Circle, and beyond. On February 18, 2020, St. Clement’s School marked the third annual Hockey Day with a titanic clash against Branksome Hall at the Mattamy Athletic Centre.

Although this was the third Hockey Day, it was the first in the hallowed space of the former Maple Leaf Gardens, and only the second to actually reach the ice after last year’s was cancelled due to inclement weather.

The day began at 21 St. Clements Avenue with a spirited pep rally during assembly. Before the entire School, the SCS Ice Hockey Team was cheered and well-wished as they ran through an archway of raised hockey sticks. Cheers were rehearsed and excitement built before the team boarded the coach for the Mattamy Athletic Centre.

With the entire School from Grade 7-12 in attendance, SCS took to the ice for the pre-game warm-up beneath the roof of a building in which the Maple Leafs had won 11 Stanley Cups and the NHL had held its first-ever official All-Star Game in 1947.  After St. Clement’s principal Martha Perry ’85 and her Branksome counterpart shared the ceremonial puck drop and Urmi P. ’20 sang the national anthem, the excitement reached a fevered pitch.

As the Clementines in attendance raised the 89-year old roof, SCS responded to the outstanding support with two first period goals to take a commanding lead. The game ebbed back and forth with superb skating, strong defensive work, skillful stick play, and some brave goaltending. A final-minute rally applied tremendous pressure to the opposition but when the buzzer sounded, SCS was just short.

No one in attendance will forget the game and every member of the St. Clement’s team were rightly feted as the champions they are before they left the ice ready to continue with the rest of their season.