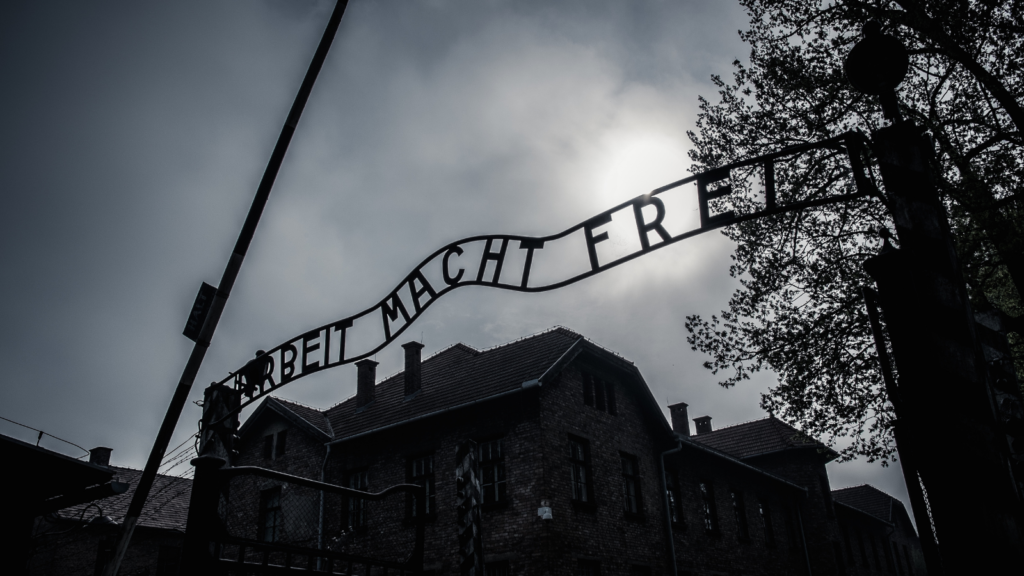 The e-ssembly was introduced by Meira and began with music by Viktor Ullman which he had composed while in Theresienstadt concentration camp. Ullman was later deported to the camp at Auschwitz-Birkenau, Meira explained, where he was killed in the gas chambers in October 1944.

“Today is an important day to remember the millions of people who have lost their lives due to hate,” she said. “The best way for us to learn from the past is to listen to recounts by survivors so that we can ensure that this never happens again.”

She then introduced her grandfather to the SCS community.

“I was one-and-a-half years old when Germany invaded Poland,” he recounted. “I was five years old when the Nazi onslaught against Jews reached its full fury, and seven years old when we were liberated by the Soviet Red Army in 1945.”

Due to his age at the time, Dr. Unger explained that his memories of the Holocaust are those of a child. While he can’t remember everything and the memories that he does have aren’t necessarily in chronological order, he has some very vivid recollections that he shared as examples of what he and his family endured during those very dark times.

“Overwhelmingly I remember fear,” he admitted. “This was a constant and unrelenting fear. We knew that the Nazis intended to murder every Jew that they could lay their hands on. It was just simply a matter of when and how.”

Dr. Unger lived with his father, mother, and older brother and the family co-owned a local flour mill. They lived a normal life with his grandparents not too far away and a variety of aunts, uncles, and cousins.

As the Nazis tightened their grip on Poland, they rounded up Jews from small villages and outlying areas and brought them to larger centres like Tarnów where they were forced to live in a small neighbourhood surrounded by walls and patrolled by guards. The cramped area, known as a ghetto, became home to not merely the city’s original Jewish population of 25,000, but to more than 42,000 Jews including Dr. Unger and his family. As transport became available, the Gestapo would send as many Jews to the concentration camps as they could leaving everyone in the ghetto living in fear.

Despite being so young, Unger recalls being so terrified one day that he clung to his father, repeatedly asking him to say the last prayer that Jews say to go to heaven. “I was five years old,” Dr. Unger explained. “I expected to be killed that day and I wanted to go to heaven.” His father later told him that on that day, they had recited the prayer 36 times.

He recalls being in his grandfather’s home on the upper floor of a building one day when two Nazis arrived and ordered him to come with them.

“He stood up instantly,” he said. “My grandfather was an observant Orthodox Jew and he picked up his prayer bag which contained his prayer books, his shawl, and his phylacteries. To my grandfather, where they were taking him and what they were going to do to him was unimportant. What mattered was that he was able to practice his faith wherever he went.”

Dr. Unger watched his grandfather walk out of the door. Moments later, he heard him pushed down the stairs, and then a gun shot. That was the last time he ever saw him.

In 1943, the family escaped from the ghetto. When the Nazis arrived in Tarnów they had dispossessed the Jews of all their belongings and Dr. Unger’s father lost his co-ownership of the flour mill.

“The flour mill was allowed to hire nine Jews as slave labour, one of whom was my father,” Dr. Unger said. “Every day they would march the nine Jews out of the ghetto and take them to the flour mill to work.” This work enabled Dr. Unger’s father to fashion a way to save his family.

With three others, Dr. Unger’s father built a false wall in the attic above the workshop. The plan was for the families to live in the attic hidden behind it. Dr. Unger still recalls their escape from the ghetto when their father took them to the wall one night. His older brother scrambled to the top first and then helped pull Dr. Unger up while his father pushed from below. Once over the wall, they fell into the snow on the other side and crouched. The wall was regularly patrolled by the Nazis and anyone who was spotted trying to escape from the ghetto was summarily shot. From their place in the shadows, they heard gunshots not far away.

Dr. Unger and his family spent two years hiding in the attic. There were eight people behind the false wall and initially they hired a young gentile to bring them food. When he was shot dead guiding Jews from Poland into Hungary, they had to come up with another plan.

“My father would sneak out at night and go to where the flour was milled and bring back some flour and barley,” he said. “For the next two years we made patties – like pita – and soup from the barley, and that’s what we ate.”

The day that the Soviet Red Army liberated the city remains vivid to him. Although he wanted to rush downstairs to greet the soldiers, he was so weak and unaccustomed to walking that he fell.

Dr. Unger shared photos of his family and of Tarnów. There were pictures of the tiny space in the flour mill where the family had hidden, and of his aunt and uncle and grandfather who had all been murdered. There was a photograph of his mother’s brother who had survived the concentration camps only to die days after his liberation, and of the monument erected in Tarnów after the war by the handful of Jews who had survived out of a population of 25,000.

“When events get very large, when numbers get to be very large,” Dr. Unger explained, “they lose all meaning. The Nazis murdered six million Jews, half of the Jewish population of the world at that time. 90% of the 3.5 million Jews living in Poland at the time.”

Despite the existence of incontrovertible evidence, there are still those who deny that the Holocaust ever happened.

“When I first heard that some people were denying the Holocaust, I thought: Why should I care?” Dr. Unger shared. “It’s the most recorded event in human history, why should I care that there are some nuts that say that it didn’t happen? But I pondered that a little more and I thought to myself, those that deny the Holocaust are in effect saying that antisemitism or hatred is okay because really it doesn’t do that much damage any way.”

Dr. Unger believes that one of the best ways to defeat racism and antisemitism is through facts.

“The truth is the best cleansing agent possible,” he said. “We must start with the notion that hatred is never right and compassion is never wrong. The best way to fight any type of hatred is just to be informed as you have been doing today.”

After Dr. Unger’s talk, students returned to their classes to discuss what they had heard and learned.

“Having an SCS connection to someone who survived the Holocaust means it’s not as long ago as we sometimes think,” expressed Quincy K. ’26. While Grace M. and Narin S. (both ’25) echoed Holocaust survivor and Nobel Peace Prize recipient Elie Wiesel’s belief that “when you listen to a witness, you become a witness.”

Dr. Israel Unger is the author of The Unwritten Diary of Israel Unger. In 1998, he was one of 50 Holocaust survivors to be honoured by the government of Canada for the 50th anniversary of the Universal Declaration of Human Rights.