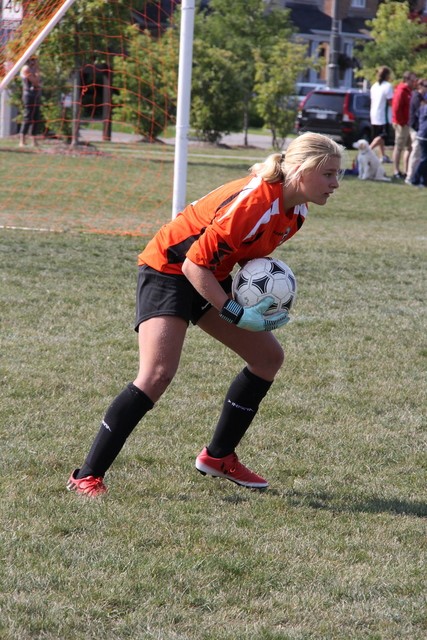 Soccer isn’t new to Clara H. ’21 – now in Grade 9, she’s been playing the sport since Grade 5. At her previous school, the soccer team didn’t have a goalkeeper so she volunteered to play that position. Something instantly clicked for Clara in net, and she’s loved it ever since!

During the 2017 season at SCS, Clara split her goaltending duties between the U15 Soccer Team and the Senior Soccer Team, including a tournament and two regular season games for the latter. In fact, the senior trip to New Brunswick for tournament play was the highlight of her season. Clara loves the team aspect of the game, but also the adrenaline rush she gets when she prevents the opposing team from scoring. She credits solid reflexes and good instincts with helping her to keep the ball out of the net.

In addition to the soccer field, Clara feels at home in the pool; she has been swimming competitively since age 7. She loves that soccer has recently started to play a bigger role in her life and considers the two sports as opposite ends of a spectrum – soccer excites her, and swimming calms her.

Check back next week for another edition of #SCSSpotlight, where we profile a different student, group, activity, or interesting event!