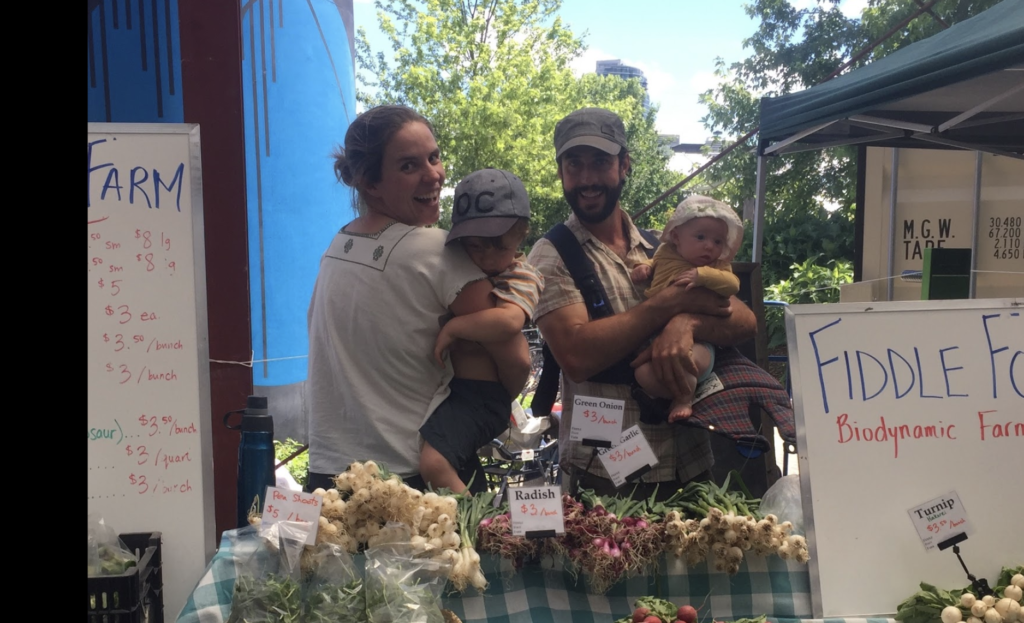 Our Grade 1 students have been getting to know some Community Helpers recently. As part of their learning, Ms Chan’s class received a virtual visit from Alumna Amy Ouchterlony ’98.

Amy attended SCS from Grades 7-12, and returned to the School as a teacher. It was only later that she turned to farming. “When I was a student, I had no idea that I was going to grow up and be a farmer,” she explained to the class. “Sometimes that happens in life; you don’t know what you might grow up to do, but I’m sure glad that I became a farmer. It’s a really fun job and way of living, and I like the role that I can play in our community.”

Farmer Amy (as she encouraged the class to call her), her husband Graham, and their two children operate Fiddle Foot Farm, an organic vegetable farm located halfway between Toronto and Collingwood. From April to November, they bring in three or four additional people to lend a hand and to learn about farming. Amy and Graham teach their staff many skills over the course of the season, in hopes that, one day, they may start their own farms.

“One thing I really like about being a farmer is that I am also thinking of myself as a scientist, because I’m learning about nature and how things work,” she said. “I’m an artist when I create a display of our food. I’m also a writer, an engineer, a carpenter. I’m a teacher. So many things are involved with farming – that’s something that I really like about it.”

Farmer Amy explained to the class that organic farming is a way of growing vegetables without using any harmful chemicals.

Although primarily a vegetable farm, Fiddle Foot Farm does have a few cows.

“The reason we have these animals is actually to make compost, which is one of the ways that we get our soil to be really healthy,” she explained. “Compost is when we take all of the manure from the animals and we let it sit until it’s not stinking anymore and when we put it onto the fields, it helps with the soil fertility. That’s just a big word that means the amount of life in the soil, to give our plants energy.”

Ms Chan’s students were curious about how Farmer Amy helps the community.

“There are a few ways,” she replied. “We grow healthy food for people to eat; we teach people about where their food comes from; and we give to people who sometimes have a hard time buying their own food.”

Farmer Amy explained that everyone needs to eat every day and the closer that food is grown to where they live, the less it has to be transported.

Fiddle Foot Farm also helps some of the local efforts to assist people who struggle with food insecurity. She told the class about how some of the food from her farm is given to people who are having a hard time buying food for themselves.

Fiddle Foot Farm sell their vegetables at the local Farmers’ Market, all lovingly displayed on a large table beneath a banner. They also invite people to become Community Supported Agriculture members.

“It’s kind of like signing up for a magazine,” Farmer Amy told the class. “They sign up at the beginning of the season and then every week they get a fresh box of vegetables from our farm. That’s another way we work with our community. People say, ‘I want food from your farm’, and we give them the vegetables throughout the season when we’ve just harvested them.”

For Amy, farming is more than just a job, it’s a true labour of love. She is able to spend time with her family, help the community, and do something that she truly enjoys. Plus, she loves veggies! “I really love vegetables because there are so many different ones, in so many different colours,” she enthused.