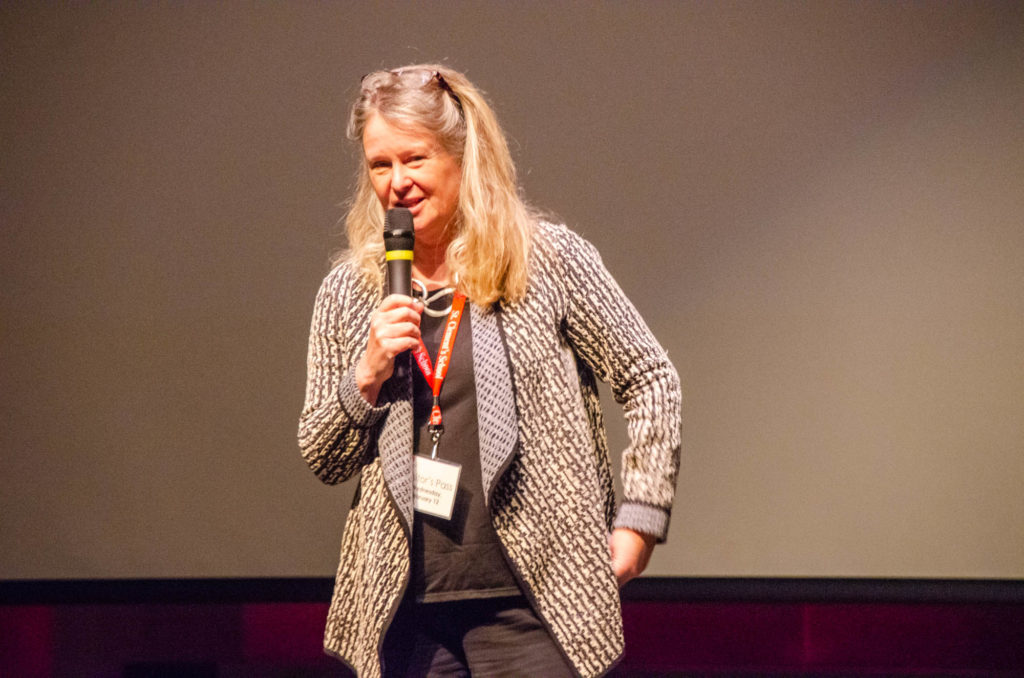 St. Clement’s alumna and acclaimed documentary filmmaker Nancy Lang ’76 returned to the School on February 12 to present a private screening of her latest work Margaret Atwood: A Word After a Word After a Word is Power to Grades 11 and 12.

The 78-minute documentary on Canada’s great writer debuted at the Toronto International Film Festival in 2019 and has now been screened all over the world, from Australia to Iran. More than a year in the making, the film contains personal stories and anecdotes from Atwood and many of her closest friends and family members and follows her as she speaks in Amsterdam, attends the Hay-on-Wye literature and arts festival in Wales, travels to the Arctic aboard an expedition ship, and visits the set of the television series The Handmaid’s Tale.

“When we started work on the project in 2017,” Nancy explained, “Margaret said she wouldn’t be able to provide us with a sit-down interview until early 2019 because she was working on a novel. We didn’t know it at the time, but that turned out to be The Testaments.”

In the meantime, Nancy and her team followed in Atwood’s historical footsteps to her Toronto haunts (the setting of many of her novels), some of her favourite northern Ontario spots, and to Harvard (a partial inspiration for The Handmaid’s Tale.) They also met with her family and closest friends including Graeme Gibson, her long-time partner, who passed away just as the documentary was completed.

For Nancy, the visit to St. Clement’s was her first time back at the School since 1975.

“We just had the east building then and a couple of houses,” she recalled as she looked around Powell Hall. “Our assemblies, lunch, everything, happened in the basement.”

Nancy’s mother Frances (Shields) Lang ’40 is also an SCS alumna, as are her nieces Nicky ’14 and Sarah ’16. Fun film fact: Nicky appears – uncredited – in the documentary wearing a white dress while a scene from Atwood’s 1969 novel The Edible Woman is described. It’s her SCS graduation dress!

Nancy spent her final two years of high school at SCS before attending the Ontario College of Art (now OCAD.) She was an artist before moving into documentary filmmaking, almost by accident. As she said to the girls after the screening, don’t say no to something just because you don’t know how to do it.

“I was asked to help write a pitch for a documentary on (Canadian artist) Tom Thomson,” she explains. “Once the project got the go-ahead, I remained on as researcher and producer.”

In 2015 Nancy wrote and produced Painted Land: In Search of the Group of Seven, followed by producing and directing Where the Universe Sings: The Spiritual Journey of Lawren Harris.

Margaret Atwood marks the first foray into a literary study and she admits to having been nervous ahead of her first interview with Atwood.

“We had seen these television interviews that Margaret had given over the years and knew that she could be a tough interviewee,” she says. “I didn’t sleep much the night before we did it!”

The interview went well and the end result is a rare personal portrait of a private person and a Canadian icon.

Conversation about Margaret Atwood and her work isn’t limited to Nancy’s recent visit to SCS, however. On Thursday, February 20, the SCS Alumnae Book Club will meet in the Lassonde Library to discuss The Handmaid’s Tale and The Testaments hosted by former SCS English teacher Patricia Westerhof.

To RSVP for the Book Club or for more information on how to participate remotely, please contact Meagan Thomas at meagan.thomas@scs.on.ca