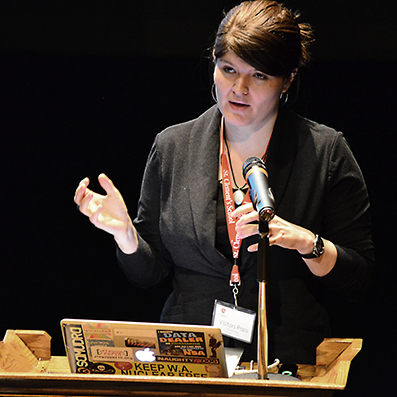 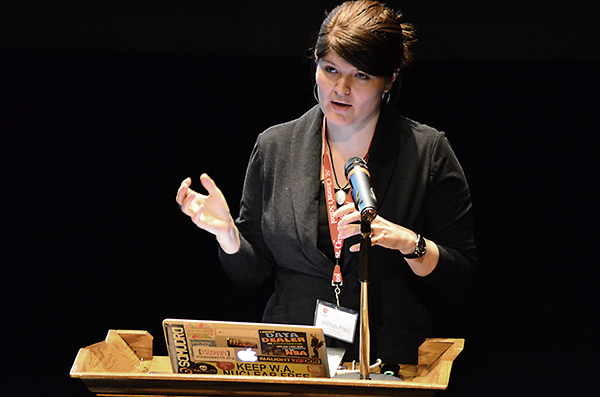 Dr. Kate Raynes-Goldie ’00 is an award-winning game designer, researcher and educator working at the intersection of physical and the digital. She is the Director of Interactive Programs at FTI and the Director of Games We Play, a game consultancy which creates games for education and positive social change. She is also an Adjunct Research Fellow at Curtin University in Australia.

Dr. Raynes-Goldie returned to St. Clement’s School this week to share her current work and experiences as a woman in the field of technology and gaming.

Did you know that while 50% of women play video games, only 10% are actual game-makers? The same goes for the technology industry; the majority of women use technology in their personal and professional lives, but only a small percentage are the creators of these technologies. This is changing however, and as Dr. Raynes-Goldie shared, many new opportunities are opening up for women, from coding and programming to creative roles contributing writing, art, and design to new technologies. Regardless of whether it is a new game, application, or other innovation, the fact remains that technology works better if it serves everyone, and for that women’s voices and perspectives are key.

Dr. Raynes-Goldie’s own route to her current career was unusual in that when she started there were very few programs of study focusing solely on technology and gaming. In fact, she began with the study of Semiotics & Philosophy at Queens and the University of Toronto. This was a gateway into further studies abroad at Curtin University in Australia, one of the only locations where a PhD in Internet Studies is obtainable. Because she went down an unconventional track, she had to be resourceful and create new job opportunities for herself along the way. Following her passion for technology, creativity, working with people and making the world a better place, Dr. Raynes-Goldie leveraged activities like volunteering, writing and blogging, and independent study to open up a new path for herself. 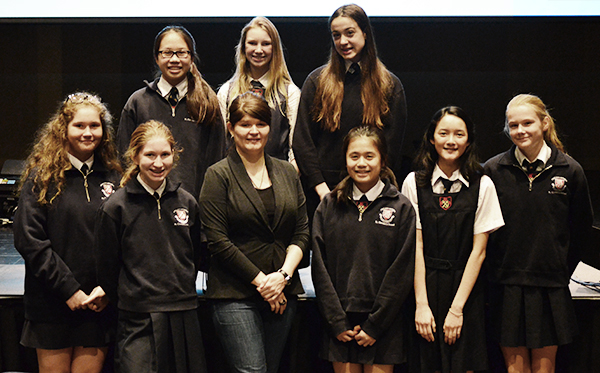 While a career in technology or gaming is not for everyone, there were two very important take-aways from Dr. Raynes-Goldie’s talk that are universally applicable. First: the importance of balance. Students may feel pressure to check off certain boxes or travel a particular path, which can feel stressful. Dr. Raynes-Goldie articulated to the girls how important it is to take your health into consideration, while looking to striking a balance between academics/career aspirations and mental and physical health.

Secondly, follow your passions, even if they are unconventional, or seem difficult to achieve. Your passions will keep you motivated and lead to success. Do what you love, because no one else gets to live your life but you!

Dr. Raynes-Goldie’s involvement with current SCS students doesn’t end there. Her organization, Games We Play, has partnered with Weerianna Street Media, an Indigenous-run media organization in the north west of Australia to create an augmented card game. The game will teach local Indigenous children and teens about their culture, specifically the “Galharra” system which encompasses many areas of society and culture, including hunting, gathering, marriage and respect. Dr. Raynes-Goldie will be returning to SCS later this month to share a prototype of the game with the girls, giving them the opportunity to provide feedback. As part of this process, Dr. Raynes-Goldie will take the girls through the basics of the game design process, as well as providing details about the game project itself and the Indigenous culture which the game is designed to teach. You can find Dr. Raynes-Goldie online via her blog (k4t3.org) and her organization (Games We Play).
[/scs_section]